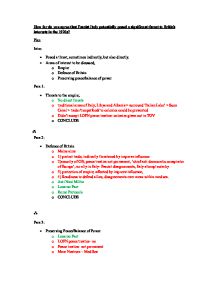 How far do you agree that Fascist Italy potentially posed a significant threat to British interests in the 1920s?

Another aim of Britain's which may have been indirectly affected by Italy's view to improving its influence was the Defence of Britain. The main aims of Britain's defence policy were to protect trade, ensure the security of Britain, to protect the empire and to be ready to defend its allies. Protecting trade, and protecting the empire, as mentioned above, was indirectly threatened by Italy's desire to improve influence. Mussolini made it clear from the start that any peace treaty made was only viewed as semi-permanent or was entirely ignored. This made Britain vulnerable, as any peace treaty involving Italy could be disregarded by them. As well as disregarding the peace treaties, there were disagreements between Britain, France and Italy as to the influence over the areas around the Mediterranean sea. If Italy had decided to press the issue, they had the ability to trap troops in an area of Britain's empire by blocking the Suez Canal, meaning British forces may be otherwise engaged in trying to access their allies, instead of being able to assist them. ...read more.

Other than sign the Locarno Treaty, Mussolini was very anti peace, and wanted to gain power for Italy. As previously mentioned, Mussolini wanted to increase Italy's influence over areas such as Libya, Albania etc. and this would have upset the balance of power within Europe, as Italy would have ended up controlling more of Europe than perhaps other countries did. Italy also still played the typical role of acting as the 'pivot' of power, as it could ally with either the typically German side, or the typically west side such as England/France. With Italy being Fascist, it was unlikely to ally with England or any other democratic countries, meaning the risk was that countries such as Germany would have the advantage in a war situation. It meant they would also have more power behind them, therefore upsetting the ideal balance of power. Mussolini also declared peace treaties invalid, directly threatening Britain's ideal 10 year rule, and therefore the preservation of peace. Overall it is clear that Italy could have potentially posed a very significant threat to British Interests, due to Mussolini's anti-democratic and anti-peace views. ...read more.