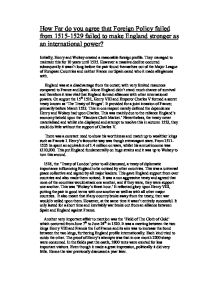 How Far do you agree that Foreign Policy failed from 1515-1529 failed to make England stronger as an international power?

How Far do you agree that Foreign Policy failed from 1515-1529 failed to make England stronger as an international power? Initially, Henry and Wolsey created a reasonable foreign profile. They managed to maintain this for 10 years until 1525. However a massive decline occurred subsequently it wasn't long before the pair found themselves out of the Major League of European Countries and neither France nor Spain cared who it made allegiances with. England was at a disadvantage from the outset; with very limited resources compared to France and Spain. Alone England didn't stand much chance of survival and therefore it was vital that England formed alliances with other international powers. On august the 15th 1521, Henry VIII and Emperor Charles V formed a secret treaty known as 'The Treaty of Bruges'. ...read more.

This was a universal peace collective and signed by all major leaders. This gave England support from over countries and also made them noticed. It was a non aggressive treaty and agreed that none of the countries would attack one another, and if they were, they were support one another. This was 'Wolsey's finest hour.' It reflected glory upon Henry VIII, putting the pair in good terms with one another as well as with all other major countries. It also meant that if any country broke away from the treaty, then war would b veiled upon them. However, at the same time it wasn't entirely successful. It only lasted for a short time and inevitably war broke out from an alliance between Spain and England against France. Another very important affair to mention was the 'Field of The Cloth of Gold' which occurred from June 7th to June 24th in 1520. ...read more.

In summery this lost England support of Charles V which inevitability meant the only way was to make a peace treaty with France. 'The Treaty of More,' in 1525. Meanwhile again Wolsey's attempts failed. France undermined England and formed an alliance with Charles V leaving England no stronger than to begin with. A long term affect of this, is that it meant Henry lost his trust in Wolsey causing the downfall in 1529. As well very importantly was Henry's divorce to Catherine of Aragon and its international relevance. Catherine's nephew was Charles V, a may with great power. He threatened the Pope to not go ahead with the annulment. Wolsey was in a predicament, if he allowed the annulment his own life was in risk, but the time he wasted trying to decide one way another outraged Henry emphatically. So much so that Henry stripped him from his title. ...read more.