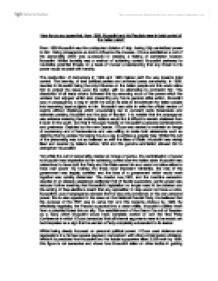 How far do you agree that, from 1924, Mussolini and his Fascists were in total control of the Italian state?

How far do you agree that, from 1924, Mussolini and his Fascists were in total control of the Italian state? From 1926 Mussolini was the undisputed dictator of Italy, having fully centralized power to him. Using propaganda as tool to influence the masses, Il Duce established a cult of the personality which was successful in creating a feeling of admiration towards Mussolini. Whilst brutality was a method of achieving control, Mussolini preferred to neutralize potential threats on a basis of mutual understanding that any threat to his power would be dealt with harshly. The destruction of democracy in 1924 and 1925 helped path the way towards total control. The banning of rival political parties and enforced press censorship, in 1926, resulted in Mussolini being the only influence on the Italian people and this would allow him to project his views upon the nation with no alternative to contradict him. The dissolution of all trade unions furthered this by removing much of the power which the workers had enjoyed whilst also preventing any future general strike action. ...read more.

Mussolini's legislation no longer need to be debated and the ending of free elections meant that any opposition in Italy would not have a voice. Mussolini's use of propaganda showed that he was only concerned on his own personal power; this is also apparent in his views on the National Fascist Party. He believed that the purpose of the PNF was to serve him and this became obvious by 1929. By effectively legalising the Fascist squadristi into a state militia, Mussolini nullified them from a potential threat into an ally. The establishment of the Grand Council of Fascism as a body which Mussolini would have complete control of, and the final Party Conference in which Il Duce demanded that all internal arguments were to be ended can be interpreted as a sign that he wanted a Party completely subservient to its leader. Whilst being clearly focussed on personal political power, Il Duce used violence and repressions in a far less severe degree in comparison with other contemporary dictators. ...read more.

The two groups did serve a purpose by publicising some barbaric actions of the regime to the rest of Europe; however by failing to collude they failed to form a solid anti-fascist front. Whilst Mussolini may have had total control in the north, the south still remained relatively free. Mussolini did little to improve communications in the region which had a tradition of regarding central government with great suspicion and this meant that much of his propaganda remained confined to the north. Yet conversely it could be said that this is irrelevant as the south had little power and could prove no real threat to Mussolini. In conclusion Mussolini was genuinely liked by much of Italy and the low level of support for dissident groups is testament to this. Mussolini achieved much control of the Italian state by gaining the support of the key groups of society such as the army and civil service by making it in their best interests. Combined with centralising power to him and ending parliamentary democracy, Mussolini was in a position of near complete control. ?? ?? ?? ?? ...read more.