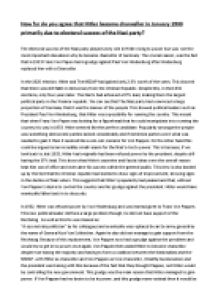 How far do you agree that Hitler became chancellor in January 1933 primarily due to electoral success of the Nazi party?

﻿How far do you agree that Hitler became chancellor in January 1933 primarily due to electoral success of the Nazi party? The electoral success of the Nazi party played a key role in Hitler rising to power but was not the most important idea about why he became chancellor of Germany. The crucial reason, was the fact that in 1933 Franz Von Papen had a grudge against Paul Von Hindenburg after Hindenburg replaced him with a Chancellor. In the 1928 election, Hitler and The NSDAP had gained only 2.8% worth of the votes. This showed that there was still faith in democracy from the Weimar Republic. Despite this, in the 1932 elections, only four years later. The Nazi's had achieved a 37% lead, making them the largest political party in the Weimar republic. We can see that The Nazi party had convinced a large proportion of Germany that it was the saviour of the people. This showed political leaders such as President Paul Von Hindenburg, that Hitler was a possibility for running the country. This meant that when Franz Von Papen was looking for a figurehead that he could manipulate in to running the country his way in 1933. Hitler seemed like the perfect candidate. ...read more.

This grudge was the main reason that Hitler managed to gain power. If Von Pappen had no desire to be in power, and this grudge never existed then it would be most likely that Hitler would have never become chancellor and so German History may have looked very different. Another reason why Hitler was made Chancellor was a piece of legislature known as 'Article 48.' This was part of the Weimar constitution that allowed the president to take emergency power in conjunction with the Chancellor and was allowed to make decisions and pass laws without the support of the Reichstag. After the wall street crash in 1929 The president, Paul Von Hindenburg decided that the economic decline was classed as an emergency. This allowed the president to choose the president he wanted to appoint. As a result of this, politicians were able to get in to government without a majority support from the Reichstag. This allowed Von Pappen to convince the president that Hitler was the best man for the job despite the fact that Hitler did not have support from the Reichstag. As well as this, due to the fact the president had been using the rights of Article 48 for so long, it made a mockery of democracy, showing people and the Reichstag that perhaps this dictatorship was the best idea. ...read more.

This was due to the fact that the most influential people in Germany (The economic elite and high ranking politicians) risked losing all of their money and power and possibly be executed if the communists did take over. This meant that they would do everything they could to stop this. This point is backed up by the fact that Von Hindenburg was more willing to sign ?The ruthless confrontation of the Communist Party of Germany" after the Reichstag fire. Even though the communists were seen as a major threat to the rich in germany. Hitler became Chancellor independant to these circumstances and was only until later in his term that this fear would be vital. Overall I Agree to a point that electoral suceess of the Nazi party was the primary reason of why they got in to power. It was an important component as without it then they would not even have been considered for any position of power, but if we look at the situatuation as a whole then we can clearly see that it was Von Pappen that drew together all of these factors in his plan against Hindenburg. Without von pappen then The Nazis would have been kept away from office by Von Hindenburg and the Germany would carry on without them. ...read more.