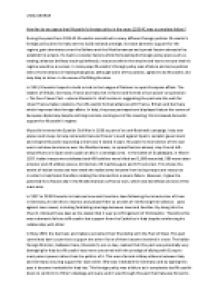 ﻿LYDIA GEORGE How far do you agree that Mussolini?s foreign policy in the years 1933-41 was a complete failure? During the years from 1933-41 Mussolini committed to many different foreign policies. Mussolini?s foreign policy aims for Italy were to build national prestige, increase domestic support for the regime, gain dominance over the Balkans and the Mediterranean and spread fascism abroad all to establish his empire. He had to consider factors whilst formulating his foreign policy plans such as trading, alliances (military back-up/defence), resources within the empire and war to ensure that his regime would be a success. In many ways Mussolini?s foreign policy was a failure and some policies led to the hindrance of making Italy great, although some of the policies, agreed to by Mussolini, did help Italy to strive in the sense of fulfilling the aims. In 1933, Mussolini hoped to build a rival to the League of Nations to repair European affairs. The leaders of Britain, Germany, France and Italy met in Rome and formed a four-power co-operation ? The Four Power Pact ? where Mussolini?s chief motive in suggesting the pact was the wish for closer Franco-Italian relations. ...read more.

In September 1939, Germany invades Poland and Britain and France declare war on Germany. Mussolini declares his ally has been treacherous with no confrontation, and therefore voided the Pact of Steel. Ultimately the Pact of Steel initially is the end of Mussolini as it forces him to join the war on the side of the Germans and because of this, the Pact of Steel foreign policy is a failure. In 1934, Hitler ordered the Austrian Nazis to create havoc in Austria to gain Anschluss. This turned into an attempt to overthrow the government. Chancellor Dollfuss was assassinated but the attempted coup failed because the Austrian military intervened to back up the government. Italy?s agreement with Austria meant that it would protect Austria from outside aggression. Mussolini honoured the agreement and moved Italian troops to the Austrian border to deter Hitler from invading. This action emphasised the power Mussolini had as he managed to stop and deter Hitler from invading Germany, it was internationally and domestically a great success. Although again in Hitler tries to invade Austria in 1938, by this time relationships had improved to such an extent that Mussolini permitted Hitler's Anschluss with Austria. ...read more.

This initially united Italy with Germany and Japan in complete opposition with Communists as they all had strong fascism ideology. Therefore Italy, through this pact, had established strong foreign affairs to begin to spread fascism globally. 'I want to make Italy great, respected and feared' said Mussolini in 1925. Mussolini's foreign policy included a number of positive and negative factors which all contributed to the rise, and the ultimately to the downfall, of both Mussolini and the Italian empire. It was clear that, Mussolini's foreign policy between 1922 and 1939 was not effective. His dreams of creating a powerful Italian fascist empire had crumbled. He had managed to overstretch Italy's resources and he made desperate alliances to inappropriate foreign powers in order to gain any strength to continue his dream. Instead, he lost control of his foreign policy and contributed to the downfall of Italy. Mussolini seemed to have believed his own propaganda that Italy was in a powerful and successful position and was respected in Europe. Instead the truth was that Italy had become a puppet of Hitler, who was used in order for them to get into power and Italy was left behind Mussolini's foreign policy was driven by ambition rather than common sense. ...read more.