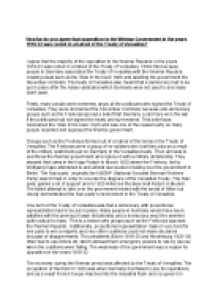 How far do you agree that opposition to the Weimar Government In the years 1918-32 was rooted in a hatred of the Treaty of Versailles?

The Nazi party gained a lot of support and in 1923 Hitler led the Beer Hall Putsch in Munich. The failed attempt to take over the government ended with the arrest of Hitler but clearly demonstrated the Nazi party?s involvement in the Treaty of Versailles. One term of the Treaty of Versailles was that a democracy with proportional representation had to be put in place. Many people in Germany would have been satisfied with the previous Kaiser dictatorship and a democracy would?ve seemed quite radical to many. This is a reason why groups such as the Freikorps opposed the Weimar Republic. Additionally, proportional representation made it very hard for one party to win a majority and very often coalitions could not make decisions because of disagreements. The presidents (Ebert 1919-25 and Hindenburg 1926-33) often had to use Article 48, which allowed them emergency powers to rule by decree when the coalitions were failing. ...read more.

Members of left-wing groups such as the KPD (German Communist Party) and the Spartacists opposed the government because they wanted a communist revolution. People had saw the Bolshevik revolution under Lenin in Russia (1917) and they called for a similar thing to happen in Germany. To conclude I do think that to a large extent the opposition to the Weimar government in the years 1918-32 was rooted in a hatred of the Treaty of Versailles. This is because the terms of the Treaty, the military cutbacks and war guilt caused opposition groups such as the Freikorp and NSDAP to form, who showed their opposition in attempted putsches. The reparations also caused large economic problems for the Weimar Republic which got them a lot of opposition such as hyperinflation in 1923. Additionally, a democracy would have been unwanted for many. However, opposition groups such as the Spartacist and the KPD were fuelled by their aims of a communist uprising. ...read more.