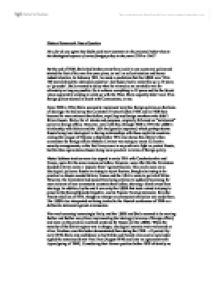 History Homework: Essay Question How far do you agree that Stalin paid more attention to the practical rather than to the ideological aspects of soviet foreign policy in the years 1929 to 1941? By the end of 1928, Stalin had broken away from Lenin's new economic policy and started the first of his own five year plans, as well as collectivisation and heavy industrialisation. In February 1931, he made a prediction that the USSR was '50 to 100 years behind the advanced countries', but Russia had to make this up in 10 years or 'go under'. Stalin wanted to delay what he viewed as an inevitable war for ultimately as long as possible. So to achieve everything in 10 years and for the Soviet Union apparently needing to catch up with the West, Stalin arguably didn't care if his foreign policy seemed in check with Communism, or not. ...read more.

This can be seen as an ideological policy as Russia are trying to reject fascism, though also trying to be practical as Russia needed Britain, France and the USA to unite to get rid of Hitler. However, the Comintern had turned from being extreme to suddenly becoming far more tolerant of non-communist countries than before, showing a break away from ideology. In addition, by the end it was only the USSR that took a stand in trying to preserve the Second Spanish Republic, and its Popular Front government, from the Fascist rebellion of 1936, though no attempt at communist revolution was made there. The USSR also interpreted not being invited to the Munich conference of 1938 as a deliberate statement against communism. War was becoming increasingly likely, and the USSR and Stalin seemed to be moving further and further away from implementing the ideology (in terms of foreign affairs) ...read more.

Also, it can maybe be argued that aligning with either of the 'imperialist blocs' would have been un-ideological, so maybe which one didn't matter to an extent. After signing the Pact, Stalin then sat back to watch the slaughter as the fascist and the democratic capitalists made mincemeat of each other before eventually being forced to enter the war himself. Therefore, to conclude, ideology was clearly ignored generally during the build up to World War II. Without any other countries that were communist, foreign policy slowly went to accepting other nations and then aligning with other nations, such as Germany, who represented completely different belief's to Stalin's. However, as War came closer, the need to improve the Soviet Union's defense became very important, and ideology became less. Britain and France went from ignoring the USSR at the Munich conference, to talks for a 'triple alliance' against Germany, showing how the build up to war changed other countries foreign perspectives. World War II ultimately wasn't concerning communism at all, and this gradually led to the USSR preparing far more for this War then implementing following the ideology. ...read more.