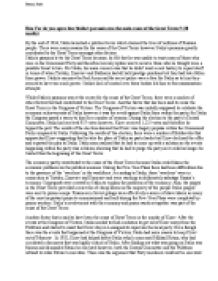 How far do you agree that Stalin's paranoia was the main cause of the Great Terror?

﻿Bunmi Jenfa How Far do you agree that Stalin's paranoia was the main cause of the Great Terror? (30 marks) By the end of 1934, Stalin launched a political terror which claimed the lives of millions of Russian people. There were many reasons for the cause of the Great Terror however Stalin's paranoia greatly contributed to the Great Terror amongst other factors. Stalin's paranoia let to the Great Terror because, he felt that he was unable to trust many of those who were in the Communist Party and therefore his only option was to remove those who he thought were a possible threat to him. For Stalin, his main concern was that he didn't want recent history to repeat itself in terms of when Trotsky, Zinoviev and Bukharin had all held prestige positions but they had later fallen from power. Stalin's enemies-the Red Army and the secret police were a fear for Stalin as to him they seemed to have too much power. ...read more.

Stalin soon realised that he had to come up with a solution as the events happening within the party was evidence showing that he had to purge the party as it could no longer be trusted thus the beginning of the Great Terror. The economy partly contributed to the cause of the Great Terror because Stalin could blame the economic problems on the political enemies. During the Five-Year Plans there had been difficulties due to the presence of the ?wreckers? in the workforce. According to Stalin, these ?wreckers? were in connection to Trotsky, Zinoviev and Kamenev and were working to deliberately sabotage Russia?s economy. Scapegoats were created by Stalin to explain the problems of the economy. Also, the purges in the Great Terror provided a reservoir of cheap labour as the majority of the people Stalin purged were sent to prison camps. Prisoners in Soviet gulags were effectively a source of slave labour as many of the most important projects commissioned and built during the Five-Year Plans were completed by prison workers. ...read more.

There was the argument that Party members could not be executed for simply opposing Party; Stalin saw his as a betrayal. Soon after, in 1934 Kirov was murdered by a gunman in his Leningrad headquarters. Kirov?s murder was soon picked up by the Soviet press quickly and pinned the murder on Leonid Nikolayev who they claimed was working for a secret ?Trotskyite-Zinovievite? terror group who wanted nothing less that the overthrow of the Soviet government; Zinoviev and Kamenev were soon arrested. For Stalin, this was very convenient because the murder had rid him of his two most important rivals and allowed him to imprison two of his old opponents. To conclude, Stalin?s paranoia was the main reason for the Great Terror as he felt that he was unable to trust many people within the Communist Party and therefore his main aim was to get rid of those who posed as a potential threat. From the start of Stalin?s paranoia, there stemmed other factors that progressively led to the Great terror such as the Congress of Victors and the murder of Kirov. ...read more.