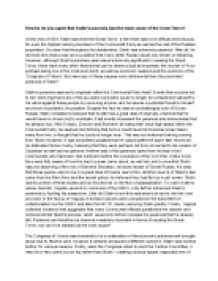 How far do you agree that Stalin's paranoia was the main cause of the Great Terror?

﻿How far do you agree that Stalin's paranoia was the main cause of the Great Terror? At the end of 1934, Stalin launched the Great Terror, a time that was to be difficult and tortuous for even the highest ranking members of the Communist Party as well as the rest of the Russian population. It?s clear that throughout his dictatorship, Stalin was extremely paranoid. After all, he did hold immense power and a position that many within Russia would only dream of obtaining. However, although Stalin?s paranoia was indeed extremely significant in causing the Great Terror, there were many other factors that can be deemed just as important; the murder of Kirov perhaps being one of the most prominent, as well as economic reasons and the outcome of the ?Congress of Victors?. But were any of these causes more detrimental than the prominent paranoia of Stalin? Stalin?s paranoia seemed to originate within the Communist Party itself. Events that occured led to him believing that many of his so-called comrades could no longer be considered trustworthy. He acted against these people by removing anyone who he saw as a potential threat to himself and more importantly, his position. Despite the fact he was an unchallenged ruler of Soviet Russia, Stalin consistenly believed that he still had a great deal of enemeis, enemies that he would have no choice but to eradicate. ...read more.

Stalin only gained 927 votes, whereas Kirov managed to obtain 1,227. This result worried Stalin greatly, as it appeared that Kirov was significantly more popular than himself within the Communist Party. What further worsened the issue was that a group of old Bolsheviks confronted Kirov after the vote, attempting to persuade him into standing as General Secretary. Despite the fact Kirov declined, Stalin found out about the plan and therefore provided him with the evidence that he had no other option but to purge the Party due to its untrustworthy nature. This links back to his paranoia and indeed provided him with great incentives for the Great Terror. Economic factors were also a reason as to why Stalin introduced the Great Terror. By introducing this, he was able to divert all economic issues on political enemies. Rather than the ongoing difficulties within the Five-Year Plans looking as if they were due to the incompetence of them, the issues could be explained through the presence of ?wreckers? within the workforce. According to Stalin, these ?wreckers? were working for the likes of Trotsky, Zinoviev and Kamenev and so were deliberately sabotaging the outcome of the Russian economy; Stalin clearly wanted to ensure that no failure originated from him and his policies. With this method, Stalin could create scapegoats for any economic problems that may have arisen due to inherent problems associated with the Five-Year Plans. ...read more.

Moreover, Kirov?s murder gave Stalin the pretext for seeking out this ?secret terror group?. Finally, it allowed him to produce the claim that the murder showed that political dissidents were plotting acts of Terror, ultimately justifying the execution of Party members who opposed Stalin?s policies. It has been argued that Stalin and the NKVD were behind Kirov?s death, but regardless of the culprit, Stalin still benefited greatly from the murder. To conclude, I believe that Stalin?s paranoia was indeed the main cause of the Great Terror, however along with the murder of Kirov. His extensive paranoia of party members being untrustworthy and even enemies, provided him with the incentive of eradicating anyone who showed the slightest bit of opposition. Furthermore, to no surprise, he was too protective over his position, and so in his mind the only way he could carry on as the totalitarian dictator of Soviet Russia would be by eliminating anyone who stood in his way through the introduction of Great Terror. However Kirov?s murder was also extremely important and a prominent cause of the Terror. It provided him with the excuse that political dissidents were plotting acts of Terror, and also catalysed the execution of many opponents, including providing excuses for the imprisonment of Zinoviev and Kamenev. Although purges and economic issues and the ?Congress of Victors? were indeed great contributors, I do not believe they were as strong in terms of causing the Great Terror. ...read more.