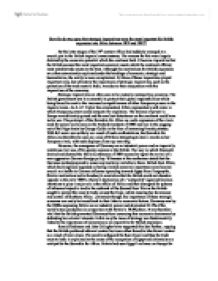 How far do you agree that strategic imperatives were the most important for British expansion into Africa between 1870 and 1902?

How far do you agree that strategic imperatives were the most important for British expansion into Africa between 1870 and 1902? By the latter stages of the 19th century Africa had suddenly emerged as a crucial part in the British imperial consciousness. The reasons for this were largely dictated by the economic potential which the continent held. It became imperative that the British secured the most important economic assets which the continent offered, most notably trade routes to the East. Although the motivations for British expansion are often conveniently explained under the headings of economic, strategic and humanitarian, the reality is more complicated. All three of these imperatives played important roles, but ultimately the importance of strategic imperatives, such as the protection of the trade route to India, was due to their conjunction with the imperatives of the economy. Strategic imperatives are often seen to be routed in metropolitan concerns. The British government saw it as essential to protect their global responsibilities whilst being forced to react to the increased competitiveness of other European powers in the imperial arena. As A.J.P. Taylor has commented, Africa represented a safe arena in which European powers could compete for expansion. The balance of power in Europe was delicately poised and the smallest disturbance on the continent could have led to war. The portrayal of the Scramble for Africa as a safe expression of the rivals need for power can be seen in the Fashoda Incident of 1898 and also in the pegging out of the Niger basin by George Goldie in the face of increasing French pressure. ...read more.

Britain had seen Egypt's reliance on Europe for economic support as being enough to maintain the security of the country. After Disraeli's acquisition of shares in the canal though, financed by the Rothschild family, it was impossible for the British to remain a passive observer when the khedive's authority collapsed in the face of nationalist riots. With 2250 of the 2727 ships using the canal in 1881 being British it is clear just how important this link between the West and the Orient was for the British. It similarly highlights the inseparable link between economic and strategic imperatives. The British occupation of the Sudan, seen as the weak underbelly of Egypt, accentuates this further, with economic and strategic investments in Egypt being secured further as a result. However strong the case may be for the importance of strategic imperatives, where they are at their most compelling is when they are intrinsically linked to economic imperatives. The British saw Africa as a continent of unfulfilled economic potential, and one that could alleviate domestic economic problems brought about by the 'Long Depression.' The Depression had led to the promotion of tariffs (erected by Russia in 1877 and France in 1878) and the abandonment of free trade in Europe. Africa, thus, represented a new, captive market to manipulate. As the Marxist historian Eric Hobsbawm has stated, economic expansion into Africa was dictated by economic pressures at home and the need to find an outlet for the mass of manufactured goods that the Industrial Revolution had made possible. ...read more.

The reality is that these humanitarian motivations acted as a veneer to justify British expansion into Africa. Britain aimed to Anglicize Africa and 'spread light over the dark continent.' Egypt was upheld as proof of the success of this British civilizing mission, with Arthur Balfour praising the record of Lord Cromer in raising Egypt to stand 'absolutely alone in its propensity, financial and moral.' The reality was that British interest in the civilizing mission was minimal in comparison with a British hunger to dominate the capital of the country and notably the Suez Canal. Whilst some individuals such as Mary Kingsley and David Livingstone really believed in the civilizing mission, British politicians saw it as a convenient justification for economic and strategic expansion. The Scramble for Africa was therefore the culmination of many different considerations. Humanitarian motives played a small part in the minds of British politicians, how ultimately used the civilizing mission as justification for economic exploitation. In contrast with this strategic imperatives were most important for encouraging the British to extend their influence in Africa. However, apart from the over-zealous land grabbing carried out as an expression of power, these strategic imperatives were usually related to the protection of trade routes, essential for financial profit. In this way money can be seen as the largest driving force in compelling the British to expand into Africa between 1870 and 1902. Strategic imperatives and to a lesser degree humanitarian motives helped to give these economic motives legitimacy. ...read more.