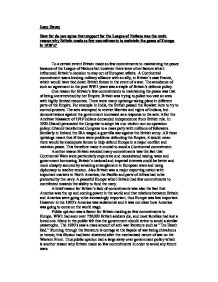 How far do you agree that support for the League of Nations was the main reason why Britain made so few commitments to maintain the peace of Europe in 1920's?

Lucy Davey How far do you agree that support for the League of Nations was the main reason why Britain made so few commitments to maintain the peace of Europe in 1920's? To a certain extent Britain made so few commitments to maintaining the peace because of the League of Nations but however there were other factors which influenced Britain's decision to stay out of European affairs. A Continental commitment was a binding military alliance with an ally, in Britain's case France, which would have tied down British forces in the event of a war. The avoidance of such an agreement in the post WW1 years was a staple of Britain's defence policy. One reason for Britain's few commitments to maintaining the peace was that of being overstretched by her Empire. Britain was trying to police too vast an area with highly limited resources. There were many uprisings taking place in different parts of the Empire. For example in India, the British passed the Rowlatt Acts to try to control protests. ...read more.

A peaceful Europe which Britain had few commitments to contributed towards the ability to fund the navy. A brief reason for Britain's lack of commitments was also the fact that America was the up and coming power in the world and that relations between Britain and America were going to be increasingly important, thus Europe was less important. However in the 1920's America was isolationist and it was not clear how America was going to come on the world stage. Public opinion was a factor for Britain making so few commitments to Europe. WW1 had seen over 750,000 British soldiers die, and most families had lost a loved one. Many in the public felt that the government should strive to avoid a similar catastrophe. The 1920's saw a mass amount of anti-war literature such as "The Death Bed." Running through the literature is outrage at the fa�ade of war being chivalrous or heroic; this illusion had been shattered after the mechanised nature of war on the Western Front. ...read more.

Britain was able to take a minor role in European commitments without being too involved. The Kellogg Briand Pact of 1928 said that war should be outlawed as a way of settling international disputes so force appeared to be prohibited as a way of settling international disputes. It represented a multilateral renunciation of war as an instrument of national policy. The League was committed to avoiding balance of powers politics and rival alliance systems which were believed to make war more likely. It is easy to see how governments were encouraged to avoid war by the influence of public opinion. However it is also easy to see there is a link between British foreign policy and the mood for multilateral settlements. Britain refused to make a military alliance with France but did make a limited guarantee of security through Locarno, thus showing they did use the League as a means of avoiding commitments. To conclude, Britain I believe mainly focused on other aspects rather than the League for her reasons of not making too many commitments in Europe during the 1920's. Although the League is one of the reasons partly I do not believe it is the main reason. ...read more.