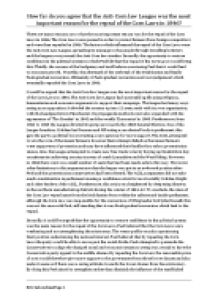 How far do you agree that the Anti-Corn law League was the most important reason for the repeal of the Corn Laws in 1846?

By having a larger electorate now due to the policies of the Great Reform Act it was vital for people of all classes to vote for the Conservative party. The confidence of the party was clearly being heightened by the conversion of individuals such as Lord John Russell, the Whig Leader. The limitations to this argument include the fact that there were only three definite full supporters of the cabinet which supported Peels proposals, Graham, Aberdeen and Herbert. The rest of the Cabinet were either unconvinced that the situation in Ireland was as bad as Peel made out, or they were worried by the moral and political implications of a Conservative administration hitherto committed to agricultural protection supporting suspension and repeal. Despite this fortunate gain in confidence within the Conservative party, the gradual conversion of Peel seemed to have the greatest importance in the repeal of the Corn Laws. Thirdly, it could be argued that the success of the budgetary and tariff reforms was the main reason for the repeal of the Corn Laws. Peel was concerned with food prices. He regarded cheap bread as the only permanent means o tackling the misery of the masses which would then improve the social stability of the country. ...read more.

Peel knew that the repeal of the Corn Laws was inevitable due to Hokinson?s view that British farmers would eventually be unable to supple the food needed by Britain?s growing population and, therefore, it would be essential to import foreign grain. However, since Peel was head of a party that was protectionist he had to choose the right moment to repeal the Corn Laws in 1846 during the famine to shadow his intent to abandon the party?s commitment to agricultural protection. In conclusion although it is obvious that there were other factors which could have contented to the repeal of the Corn Laws in 1846 such as the propaganda of the Anti-Corn Law league and the Irish famine, it is clear that the these contributing factors had a minor influence in Peels decision to repeal the Corn Law, but that it was his own personal values and belief that the Corn laws were doing much more harm than good for the United Kingdom and knew before any of the other influences such as successful budgetary and tariff reforms and opportunities in the political system that the repeal of the Corn Laws was going to be inevitable. ________________ Eric SabonchianPage ...read more.