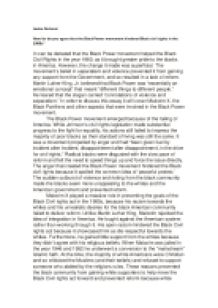 How far do you agree that the Black Power movement hindered Black civil rights in the 1960s?

﻿Jackie Orchard How far do you agree that the Black Power movement hindered Black civil rights in the 1960s? In can be debated that the Black Power movement helped the Black Civil Rights in the year 1960, as it brought greater pride to the blacks in America. However, the change it made was superficial. The movement?s belief in separatism and violence prevented it from gaining any support from the Government, and so resulted in a lack of reform. Martin Luther King, Jr. believed that Black Power was ?essentially an emotional concept? that meant ?different things to different people.? He feared that the slogan carried ?connotations of violence and separatism.? In order to discuss this essay it will cover Malcolm X, the Black Panthers and other aspects that were involved in the Black Power movement. The Black Power movement emerged because of the failing of America. While Johnson?s civil rights legislation made substantial progress to the fight for equality, his actions still failed to impress the majority of poor blacks as their standard of living was still the same. ...read more.

His open racism hindered the Black Civil rights act because it showcased him as dis-respectful towards the whites. Furthermore, he gained little support from the whites because they didn?t agree with his religious beliefs. When Malcolm was jailed in the year 1946 and 1952 he underwent a conversion to the ?mainstream? Islamic faith. At the time, the majority of white Americans were Christian and so criticized the Muslims (and their beliefs) and refused to support someone who abided by the religions rules. These reasons prevented the black community from gaining white supporters to help move the Black Civil rights act forward and prevented reform because white supporters were essential to gain Federal Government attention. Malcolm X appeared suspicious and dangerous to the white authorities because of his beliefs in violent protest towards the whites. In addition to this, he failed to gain help from the Federal Government because he insulted them constantly, and confessed to believing that most northern white liberals were hypocrites and ?wolves in sheep?s clothing.? However in some respects, Malcolm did inspire some blacks and started to make the whites fear the blacks rather than feel superior to them. ...read more.

It provoked and antagonized the white people so it was difficult to initiate reform. Their aggressive, racist demeanor as well as their ideology made it hard for white Americans to appeal to them and their illegal behavior, such as arming black people with guns, gave no reason for the Federal Government to dedicate their time to attending to the Black Civil rights in the 1960s. However, the Black Panthers gave the black community a sense of pride and confidence in their culture and race. They also inspired other minority groups such as the Mexicans and the Jews, to fight for their own rights as well. Black Power did not make any profound changes to the Black Civil rights act in the 1960s but it can be argued that they still created reform, even if it was not significant. The Black Power movement brought a division to the Black Civil Rights movement, and had threatened the white community of America which had lost them white helpers, but it also brought pride and hope back to the blacks and inspired all of the oppressed minority groups in America to fight for their rights and equality. ...read more.