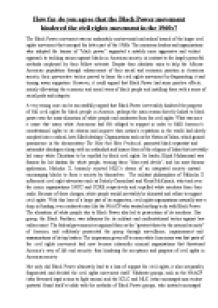 How far do you agree that the Black Power movement hindered the civil rights movement in the 1960s?

﻿How far do you agree that the Black Power movement hindered the civil rights movement in the 1960s? The Black Power movement was an undeniably controversial and radical branch of the larger civil rights movement that emerged the latter part of the 1960s. The numerous leaders and organizations who adopted the banner of ?black power? supported a notably more aggressive and violent approach to tackling racism against blacks in American society, in contrast to the largely peaceful methods employed by their fellow activists. Despite their idealistic aims to help the African- American population through enhancement of their social and economic position in American society, their provocative tactics proved to harm the civil rights movement by fragmenting it and turning away supporters. However, it could argued that Black Power had some positive effects, mainly alleviating the economic and social woes of black people and instilling them with a sense of racial pride and integrity. A very strong case can be successfully argued that Black Power irreversibly hindered the progress of full civil rights for black people in America; perhaps the main reason directly linked to black power was the mass alienation of white people and moderates from the civil rights. ...read more.

The impression given off to many white Americans was that parts of the civil rights movement had now become inherently criminal organisations that threatened America?s way of life and security- thus hindering the acceptance and progress of civil rights in American society. Not only did Black Power ultimately lead to a loss of support for civil rights, it also irreparably fragmented and divided the civil rights movement itself. Moderate groups, such as the NAACP (who favoured legal action to fight racism) and the SCLC and MLK (who encouraged non-violent protests) found itself at odds with the methods of Black Power groups, who instead encouraged armed aggression and rioting. One example where these divisions became apparent is during the Meredith March of 1966, where thousands of civil rights activists marched from Memphis to Jackson to encourage voting. Stokely Carmichael was among them, and he along with many other activists (especially the young ones) was exasperated with the lack of progress of civil rights at the time and negligible significance of the March. ...read more.

Black Power groups not only helped African-Americans to be self-reliant through employments, but through instilling a sense of racial identity and pride that particular resonated with young blacks living in the ghettos. To conclude, it is truer than not that Black Power hindered the progress of civil rights rather than aiding it. Despite the fact that Black Power exposed the squalid conditions of ghettos that many black Americans lived in , as well equipping with the means necessary to make social and economic gains to achieve self-reliance, these achievements are hardly noteworthy when set against the momentous passage of the Civil Rights Act and the Voting Rights Bill that passed in Congress due to a large part by Martin Luther King?s methods of peaceful protests and the huge support that it managed to achieve amongst the American people. Ultimately, the Black Power movement fragmented the movement and caused a mass alienation of white Americans and moderates, resulting in it being a major hindrance to civil rights during the 1960s. ...read more.