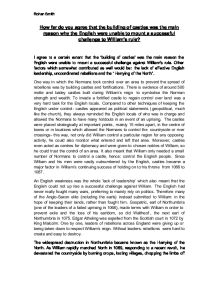 How far do you agree that the building of castles was the main reason why the English were unable to mount a successful challenge to William's rule?

Edgar Atheling was expelled from the Scottish court in 1072 by King Malcolm. One by one, leaders of rebellions across England were giving up or being taken down to respect William's reign. Without leaders: rebellions were hard to create and easy to destroy. The widespread destruction in Northumbria became known as the Harrying of the North. As William rapidly marched North in 1069, responding to a recent revolt, he devastated the countryside by burning crops, looting villages, chopping the limbs off all adult males as well as slaughtering the children (so that they may not have revenge when they grow older) - this was a clear representation of his brutality but it was nothing compared to the devastated state William left York in: corpses rotting on the roads, famine and disease spreading, this certainly set an example towards the English locals: considering the fact that the land in Yorkshire was left deserted with farms empty for over 15 years! ...read more.

However, the areas around the new castles became peaceful, since many of the risings arose from local grievances, rather than dissatisfaction with William's rule, each castle provided work for the local Saxons and kept the areas, in which they were built in, stable. If a revolt were to rise; William's men would have been able to move swiftly to put down trouble before it had a chance to develop whereas it could have taken days to march to an uprising (which would have risen in numbers by then). Castles were an effective method of keeping the English under control, they could last for years (some even to this day); which may have been why William had built hundreds of them around England during his reign from 1066 to 1087. Resources * Medieval England 1042-10228 - Toby Purser * William the Conqueror- David Bates * The English and the Norman conquest- Ann Williams * Ruling England, 1042-1217- Richard Huscroft * http://www.btinternet.com/~mrfield/Conquest/resistance/resistance_to_william.htm ?? ?? ?? ?? Rohan Smith ...read more.

This is a well structured and considerate response that shows real understanding of the functions of castles but also considers alternative explanations. Norman military superiority in other areas could also be considered. 4 out of 5 stars.