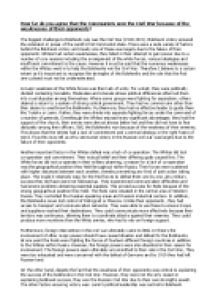 How far do you agree that the Communists won the Civil War because of the weaknesses of their opponents?

﻿How far do you agree that the Communists won the Civil War because of the weaknesses of their opponents? The biggest challenge to Bolshevik rule was the Civil War (1918-1921). Bolshevik victory ensured the extension in power of the world?s first Communist state. There were a wide variety of factors behind the Bolshevik victory and clearly one of these was largely due to the failure of their opponents. Whites had certain weaknesses, they failed in their attempt to gain power due to a number of core reasons including the arrangement of the white forces, various ideologies and insufficient commitment to the cause. However it must be said that the numerous weaknesses within the Whites went in to help the Bolsheviks win the Civil War. Therefore I believe to a certain extent as it?s important to recognize the strengths of the Bolsheviks and the role that the Red army played must not be underestimated. A major weakness of the White forces was their lack of unity. For a start, they were politically divided containing Socialists, Moderates and Liberals whose political differences often led them into cruel disputes among themselves. ...read more.

Unlike their opponents , they had access to transport and communication networks. They were able to use these to ensure troops and suppliers reached their destinations. They could communicate more effectively because their territory was continuous, allowing them to coordinate attacks against their enemies. They could produce more munitions than the White armies, who had to rely on foreign support. Furthermore, foreign intervention in the civil war ultimately came to little. In theory the involvement of other major powers should have caused disaster and defeat for the Bolsheviks. At one point the Reds were fighting the forces of fourteen different foreign countries in addition to the Whites within Russia. However, the foreign powers were also disunited in their reason for involvement. The foreign powers seem ultimately uncommitted to their role in the Civil War, They were too exhausted and were concerned with the defeat of Germany and by 1919 they had left Russian land. On the other hand, despite the fact that the weakness of their opponents was central to explaining the success of the bolsheviks in the Civil War. However, they were not the only reason in explaining bolshevik success, they won the Russian Civil War due to their own strengths aswell. ...read more.

However, Lenin was sensible enough to see the need for change when problems arose. Following the peasant uprising and naval revolt, Lenin abandoned War Communism and replaced it with the New Economic Policy to ensure that the Bolsheviks would stay in power in the latter stages of Civil War. To conclude, there is much evidence to suggest that the view put forward in the essay is a valid one. The bolsheviks faced a divided and poorly organized enemy in the form of the Whites. Generals Deniken, Yudenich and Admiral Kolchak failed to coordinate their military forces, allowing the Bolsheviks to confront them individually. The Whites had a number of weaknesses, the most significant being their basic lack of unity, organisation and poor geographical position throughout the Civil War. While, Anti-Bolshevik forces contained those who wished to see the return of a Tsarist style regime to Liberals, Socialists and Social revolutionaries such disunity was an important factor in explaining Lenin?s success. However, we must be careful not to dismiss the strengths of the Bolsheviks entirely, particularly the assets and achievements of Trotsky. Therefore, while the success of the Bolsheviks would seem to have more to do with the weaknesses of their opponents, the Red?s did possess certain key strengths which are partly responsible for their success in the Civil War. ...read more.