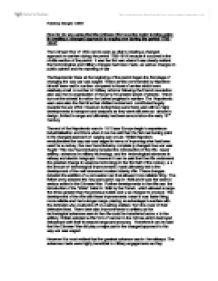 How far do you agree that the Crimean War was the major turning point in creating a changed approach to waging war during the period 1793-1918?

How far do you agree that the Crimean War was the major turning point in creating a changed approach to waging war during the period 1793-1918? The Crimean War of 1854 can be seen as vital in creating a changed approach to warfare during the period 1793-1918 because it occurred in the middle section of the period. It was the first war where it was clearly evident that technological and military changes had been made, as well as changes in public opinion and the reporting of war. The Napoleonic Wars at the beginning of the period began the first stage of changing the way war was waged. These armies commanded by Napoleon himself were vast in number compared to those of armies which were relatively small. A number of military reforms following the French revolution also saw the re-organisation of the army for greater speed of attacks. This in turn set the wheels in motion for further progress in warfare. ...read more.

The development of the rifle with these improvements meant it was faster firing, more reliable and had a longer range, placing an advantage in warfare with the defender who could pick off on-rushing soldiers from the cover of their defensive lines. There were also improvements to artillery as the technological advances seen in the rifle could be transferred across to the artillery. Britain adopted a rifle form of cannon in the Crimea which destroyed Sebastopol with their increased range and accuracy. Therefore it can be said that the Crimean War did play a major part in the changed approach to the way war was waged. However it is most evident that the greatest advance was in the railways. The advances made were highly beneficial to military engagements as they allowed troops to be moved much faster and more reliably. In 1848 the railways were used for exactly this reason and had a highly significant effect. ...read more.

This out of date offensive was used right up until World War I when the technology had advanced even further and a the range of weapons had increased meaning that the distance to the enemy without any cover had widened and any offensive was suicidal. Therefore, one can see that The Crimean War did not completely change the approach to waging war during the period. While these arguments against the effect of The Crimean War are wholly valid it can still be concluded that the Crimean War was a turning point in the changed approach to waging war during the period 1793-1918. The Crimean War brought about a whole new wave of weaponry (the rifle), a highly developed railway system, and a massively improved communication system (the electric telegraph) which ultimately revolutionised the way war was waged from a technological and military perspective. This was clearly shown throughout the period after the war. Therefore even though the tactics of war did not change massively as a result of the Crimea, it can still be considered a major turning point. ?? ?? ?? ?? Robdeep Sangha U6SB ...read more.