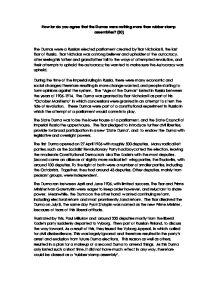 How far do you agree that the Dumas were nothing more than rubber stamp assemblies?

How far do you agree that the Dumas were nothing more than rubber stamp assemblies? (30) The Dumas were a Russian elected parliament created by Tsar Nicholas II, the last Tsar of Russia. Tsar Nicholas was a strong believer and upholder of the autocracy, after seeing his father and grandfather fall to the ways of attempted revolution, and their attempts to uphold the autocracy; he wanted to make sure the Autocracy was upheld. During the time of the Imperial ruling in Russia, there were many economic and social changes; therefore resulting in more change wanted, and people starting to form opinions against the system. The "Age of the Dumas" lasted in Russia between the years of 1906-1914. The Duma was granted by Tsar Nicholas II as part of his "October Manifesto" in which concessions were granted in an attempt to stem the tide of revolution. These Dumas were part of a constitutional experiment in Russia in which the attempt of a parliament would come into play. The State Duma was to be the lower house of a parliament, and the State Council of Imperial Russia the upper house. ...read more.

Frustrated by this, Paul Miliukov and around 200 deputies mostly from the liberal Kadets party suddenly departed to Vyborg. Then part of Russian Finland, to discuss the way forward. As a result of this, they issued the Vyborg Appeal, in which called for civil disobedience. This was largely ignored and therefore resulted in the party's arrest and exclusion from future Duma elections. This reason as well as others, resulted in a plan for a makeup of a second Duma to amend things. As this Duma only lasted such a short time, it did not have much effect in any way, therefore could be classed as a "rubber stamp assembly". The Second Duma went from February 1907 to June 1907, and was equally short-lived. The Bolsheviks and Mensheviks, and the Socialist Revolutionaries all abandoned their policies of boycotting elections to the Duma, and as a result of this they both won a number of seats. The Kadets, by this point the most moderate party, found themselves outnumbered by double by their more reactionary counterparts. ...read more.

There was beginning to be more meaning to things. The third Duma which lasted from 1907-1912 was dominated by gentry, landowners and businessmen. All of the higher classes, this system worked a lot better and more efficiently, cooperation between the Government and the Duma was a lot better, consequently the Duma lasted a full five year term, and successfully decided on 200 pieces of legislation and voted on the large amount of 2500 bills. Due to its more noble, and Great Russian composition, the third Duma, was given a nickname, "The Duma of the Lords and Lackeys" or "The Master's Duma". The Octobrists party were the largest, with around one-third of all the deputies. In terms of legislation, the Duma supported an improvement in Russia's military capabilities, as well as Stolypin's plans for land reform and basic social welfare measures. The power of Nicholas' hated land captains was consistently reduced. It also supported more regressive laws, however, such as on the question Russification, with a fear of the Empire breaking up being imminent. Stolypin was assassinated in September 1911 and replaced by his Finance Minister Vladimir Kokovtsov. ...read more.