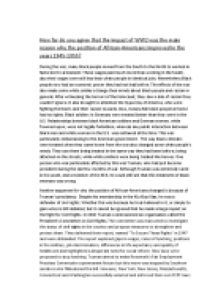 How far do you agree that the impact of WW2 was the main reason why the position of African-Americans improved in the years 1945-1955?

﻿How far do you agree that the impact of WW2 was the main reason why the position of African-Americans improved in the years 1945-1955? During the war, many black people moved from the South to the North to worked in factories for armament. These wages paid much more than working in the South, also their wages were still less than white people in identical jobs. Nevertheless Black people now had an economic power they had not had before. The effects of the war also made some white soldiers change their minds about black people and racism in general. After witnessing the horrors of the holocaust, they saw a side of racism they couldn?t ignore. It also brought to attention the hypocrisy of America, who were fighting the Nazi?s and their racism towards Jews, meanwhile black people at home had no rights. Black soldiers in Germany were treated better than they were in the U.S. Relationships between black American soldiers and German women, while frowned upon, were not legally forbidden, whereas any public interaction between black men and white women in the U.S. ...read more.

They delivered their report, named ?To Secure These Rights? in 1947 and were disbanded. The report explored gaps in wages, cases of lynching, positions in the military, job discrimination, differences in life expectancy and quality of healthcare and highlighted a desperate need for social reform. New laws were proposed to stop lynching. Truman aimed to make Roosevelt?s Fair Employment Practises Commission a permanent fixture but this move was stopped by Southern senators who filibustered the bill. However, New York, New Jersey, Massachusetts, Connecticut and Washington successfully enacted and enforced their own FEPC laws at the state level. Although most legal cases and laws were passed in the later years of the fight for civil rights, there were some court cases which had a significant impact. The case of Sweatt vs. Painter (1950) involved a black man, Heman Sweatt, who wasn?t allowed into the School of Law of the University of Texas, even though he had fit the course requirements. The University?s President was called Theophilus Painter. At the time, no law school in Texas would admit black students. ...read more.

The decision overturned the Plessy v. Ferguson decision of 1896. Although I believe that presidential action had a significant effect on the Civil Rights movement, as To Secure These Rights made segregation a public issue that could not be ignored, Truman could only do so much, mostly due to the fact he could be blocked by State law and by senators who disagreed with him such as the Dixiecrats. Nevertheless, the FEPC would only apply to government owned businesses, and so actually would not have impacted the majority of African-Americans. Truman?s second term in office ended in 1953, and he was replaced by Dwight Eisenhower, who did not share Truman?s passion for Civil Rights. He refused to comment on the case of Brown v. Board of Education, making it clear to the general public that he still supported segregation. Brown was a very significant case that was a landmark in the civil rights movement, however the change was not de facto, and it took years for most schools to fully integrate. Therefore, I believe that the impact of the Second World War was the most important factor, as it changed many people?s beliefs and made the government realise they needed to do something about segregation and racism in their country. ...read more.