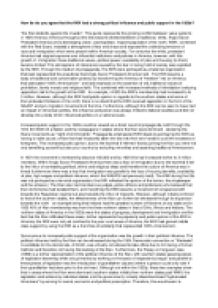 How far do you agree that the KKK had a strong political influence and public support in the 1920s?

﻿How far do you agree that the KKK had a strong political influence and public support in the 1920s? ?the Klan defends against the invader?. This quote represents the growing conflict between value systems in 1920 America; America throughout the 20s became divided between a traditional, white, Anglo-Saxon Protestant America and a developing urban, cosmopolitan, migrant population of the north. WW1, combined with the Red Scare, instated a atmosphere of fear and chaos and exposed the underlying tensions of race and immigration which were present within American society. For centuries the white, protestant America had reigned supreme over influential institutions and policies in America, however, with this growth of immigration these traditional values, political power, availability of jobs and housing (to them) became limited. This atmosphere of intolerance caused by the fear in losing hold of society was exploited by the KKK. Through the medium of propaganda, The KKK were portrayed as a fraternal organization that best represented the prejudices that Anglo-Saxon Protestant America held . The KKK became a body of traditional and conservative protest, by transforming the America of ?freedom? into an America that advocated ?100% Americanism? and laid emphasis on the assertion of old, traditional values of prohibition, family morals and religious faith. This combined with increased methods of intimidation (reducing opposition) ...read more.

However, although initially confined to that of the southern states, the effectiveness of the Klan can further be witnessed through its expansion towards the north - an example being that Indiana had the greatest number of Klaverns of any state and in 1925 40% of Klan membership was from the three northern states in that of Ohio, Illinois and Indiana. The northern states of America in the 1920s were the states of progress, development and immigration and the fact that the Klan infiltrated these areas, further represents the popularity and public opinion of the KKK in America; the KKK were not just confined to the poor rural areas of America, the KKK had gained middle class support by using the KKK as a franchise of solidarity that represented 100% Americanism. Synonymous to increased public support of the organization was the growth in their political influence. The political influence held by the Klan can be witnessed during the 1924 Democratic convention or ?Klanbake?. A candidate for the democrats, Al Smith, was virtually not allowed to take office due to him being a Roman Catholic and therefore not having the backing of the Klan. Furthermore, the Pleasy vs Ferguson case (1896) is a further representation of the political influence of the Klan, with southern states passing pieces of legislation decreeing white only primaries by working on the basis of ?separate but equal? and parallel to ...read more.

and the exaggeration of the dangers of the Red Scare throughout the 1920s, the Republican government indirectly led to the growth of the KKK by providing the KKK with the ammunition required to recruit individuals; with the KKK using the immigration laws as evidence to suggest that traditional American values were in danger and through violence and intimidation they had to be restored. The hysteria caused from events of the Red Scare such as the Palmer Raids allowed the KKK to exploit the tensions in America - these tensions being a direct result of the legislation passed by the American government. Overall, the Klan in the 1920s held considerable amount of political power - both within the northern areas and the southern states of America, however, in terms of the overall success of the Klan, this political power (as can be seen in the democratic convention of 1924) was limited federally and did not impact the legislation passed by Washington. In reference to public opinion, there is no doubt that in the mid 1920s public opinion was at the highest of 5 million nationwide, however, although films such as Birth of a Nation increased public opinion, the corruption at the heart of KKK combined with their continuing policy of racialism isolated many supporters in an America who saw these disputes as irrelevant in comparison to the oncoming economic crash in 1929 - this led to a decrease in numbers in 1928 and increased the irrelevance that the KKK had within American culture. ...read more.