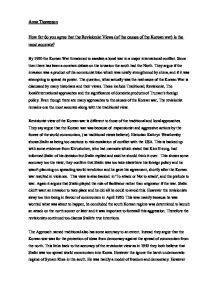 How far do you agree that the Revisionist Views (of the causes of the Korean war) is the most accurate?

Anna Thompson How far do you agree that the Revisionist Views (of the causes of the Korean war) is the most accurate? By 1950 the Korean War threatened to escalate a local war in a major international conflict. Since then there has been a constant debate on the invasion the south had the North. They argue if the invasion was a product of the communist bloc which was newly strengthened by china, and if it was attempting to spread its power. The question, what actually was the real cause of the Korean War is discussed by many historians and their views. These include Traditional, Revisionist, The local/international approaches and the significance of domestic products of Truman's foreign policy. Even though there are many approaches to the causes of the Korean war, The revisionist remains one the most accurate along with the traditional view. Revisionist view of the Korean war is different to those of the traditional and local approaches. ...read more.

This was mainly because he was worried what was about to happen, he concluded the south Korean regime was determined to launch an attack on the north sooner or later and it was important to forestall this aggression. Therefore the revisionists continued too discuss Stalin's true intentions. The Approach named traditional also has some accuracy to an extent. Instead they argue that the Korean war was for the protection of ideas from democracy against the spread of communism from the north. This links back to the accuracy of the revisionist view as in 1950 they both believe that Stalin was too spread world communism into Korea. However the ignore the harsh undemocratic regime of Synam Rhee in the south. He was hardly a model of freedom and democracy. However they overlooked this because of his communist credentials. America were very keen to become involved with the War. The hadn't always been so keen to intervention of other countries, however chorea was seen as imperative. ...read more.

He has been said to be too soft on communism, and this was seen in the traditional view of communism, as they just brushed over the regime of Synam Rhee. As Truman was blamed for the loss of china and as a result within the US establishment there had become a pressure for firm, direc ation against communism from Hawks in the air force. This was shortly before the start of the Korean War, Therefore he was under tough watch and pressure that he would not capitulate to communist aggression once again. In conclusion the different approaches all look the Korean war from a different perspective. For example the local/international factors say that the war was purely a local war which drew in superpowers. The revisionist show that Stalin played a limited role in the Korean war and was cautious to get involved with America, and the traditional view say it was democracy against te spread of communism from the north. Summarizing they all share some accuracy but the revisionist Approach is by far the most accurate. ...read more.