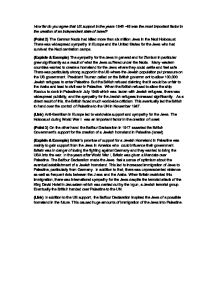 (Point 2) The German Nazis had killed more than six million Jews in the Nazi Holocaust. There was widespread sympathy in Europe and the United States for the Jews who had survived the Nazi centration camps.

(Explain & Example) The sympathy for the Jews in general and for Zionism in particular grew significantly as a result of what the Jews suffered under the Nazis. Many western countries wanted to create a homeland for the Jews where they could settle and feel safe. There was particularly strong support in the US where the Jewish population put pressure on the US government. President Truman called on the British government to allow 100,000 Jewish refugees to enter Palestine. But the British refused claiming that it would be unfair to the Arabs and lead to civil war in Palestine. When the British refused to allow the ship Exodus to dock in Palestine in July 1948 which was laden with Jewish refugees, there was widespread publicity, and the sympathy for the Jewish refugees increased significantly. As a direct result of this, the British faced much worldwide criticism. This eventually led the British to hand over the control of Palestine to the UN in November 1947.

(Link) Anti-Semitism in Europe led to worldwide support and sympathy for the Jews. The Holocaust during World War II was an important factor in the creation of Israel.

(Point 3) On the other hand the Balfour Declaration in 1917 asserted the British Government’s support for the creation of a Jewish homeland in Palestine (Israel).

(Explain & Example) Britain’s promise of support for a Jewish Homeland in Palestine was mainly to gain support from the Jews in America who could influence their government. Britain was in danger of losing the fighting against Germany and they wanted to bring the USA into the war. In the years after World War I, Britain was given a Mandate over Palestine. The Balfour Declaration made the Jews feel a sense of optimism about the eventual establishment of a Jewish homeland. This led to increased immigration of Jews to Palestine, particularly from Germany. In addition to that, there was unprecedented violence as well as frequent riots between the Jews and the Arabs. When Britain restricted this immigration, there was international sympathy for the Jews despite the terrorist attack of the King David Hotel in Jerusalem which was carried out by the Irgun, a Jewish terrorist group. Eventually the British handed over Palestine to the UN.

(Link) In addition to the US support, the Balfour Declaration inspired the Jews of a possible homeland in the future. This caused huge amounts of immigration of the Jews into Palestine.