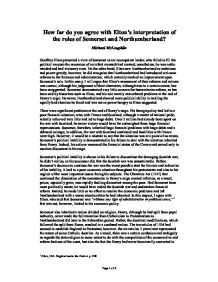 How far do you agree with Elton's interpretation of the roles of Somerset and Northumberland?

How far do you agree with Elton's interpretation of the roles of Somerset and Northumberland? Michael McLoughlin Geoffrey Elton presented a view of Somerset as an incompetent leader, who failed to fill the political vacuum the ascension of an infant monarch had created; nonetheless, he was noble minded and had visionary aims. On the other hand, Elton saw Northumberland as ambitious and power greedy; however, he did recognise that Northumberland had introduced welcome reforms to the finances and administration, which certainly marked an improvement upon Somerset's rule. In this essay, I will argue that Elton's assessment of their reforms and actions was correct, although his judgement of their characters, although true to a certain extent, has been exaggerated. Somerset demonstrated very little concern for humanitarian reform, as has been said by historians such as Elton, and his rule merely exacerbated problems at the end of Henry's reign. However, Northumberland showed more political ability in tackling the equally bad situation he faced and was not as power hungry as Elton suggested. There were significant problems at the end of Henry's reign. His foreign policy had led to a poor financial situation; wars with France and Scotland, although a matter of national pride, actually achieved very little and led to huge debts. Over 2 million had already been spent on the war with Scotland, however victory would have far outweighed these huge financial repercussions. Somerset, therefore, inherited huge financial problems with huge debts and a debased coinage; in addition, the war with Scotland continued and hostilities with France were high. However, it would be a mistake to say that the situation was at a point of no return, Somerset's political inability is demonstrated in his failure to deal with the situation inherited from Henry. Indeed, his actions worsened the financial status of the Crown and served only to escalate discontent in his reign. Somerset's political inability is shown in his failure to discontinue the damaging Scottish war; he didn't realise, as his successor did, that the Scottish war was unsustainable. ...read more.

Northumberland inherited a worse situation than Somerset and demonstrated political astuteness in his action, which dealt with the root of the problem. In addition, his dealings with the Privy Council and use of proclamation were far removed from the power hungry tactics of Somerset. Though his religious policy was arguably harsh and his attempts to alter the succession seem power seeking, Elton exaggerated this element of Northumberland's character. Arguably, Northumberland's best move was to end the Scottish and French wars. Indeed, the way in which the two leaders dealt with the wars can be seen as key in defining their rule and also how we interpret their ability. The treaty of Boulogue, although bad for England in the short-term, allowed the finances to improve and Northumberland to focus on the serious social unrest, Somerset's mess that Northumberland was forced to deal with. The treaty is a clear indication of Northumberland's superior ability to Somerset; indeed, this theme is shown throughout the governance. Far from harming the country, Northumberland had shown realism and taken the first step towards recovery. Furthermore, re-evaluation of the coinage and prohibition of usury in 1552 helped to improve the economy. Northumberland, in contrast with Somerset, made some positive achievements; his economic policies helped to reverse the terrible situation left by Somerset. Moreover, his governance seems to have shown a commitment to reform, which had a current and lasting positive effect. The reformation of the revenue courts was indicative of this commitment to reform. In 1549, five ministries were responsible for collecting money and the situation was worsened by corruption in some courts. Although reform was not carried out under his rule, the recommendations of the Royal Commission were carried out in the Marian era. Therefore, the Boulogue treaty coupled with other economic policies and a clear commitment to financial reform demonstrates that Northumberland was an able politician. Northumberland's economic policies were sound and he should be praised for steering a course out of the economic disaster created by Henry and worsened by Somerset. ...read more.