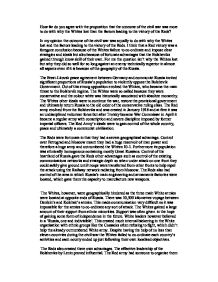 How far do you agree with the proposition that the outcome of the civil war was more to do with why the Whites lost than the factors leading to the victory of the Reds?

The Whites gained a large amount of their support from ethnic minorities. Support was often given in the hope of gaining some form of independence in the future. White leaders however believed in a 'Russia, one and indivisible'. This created much internal bickering in the White organisation with ethnic groups like the Cossacks often refusing to fight, which didn't help the already outnumbered White army. Despite having the help of no less than eleven countries during the civil war the Whites failed to co-ordinate each country's activities and each county ended up just following their own localised objectives. The Reds also created there own advantages. The effective leadership of the Bolsheviks by Lenin proved influential. The Red army had someone to organise them and someone to create clear objectives for them to follow. Lenin laid down the Bolsheviks purposes and made their intentions and morals clear for the population to see. This helped them to drum up increasing support, especially from the peasants who were presented with the choice of Reds or Whites. ...read more.

Luckily for the Bolsheviks however, Russia is a very large country and they were able to let the Whites gain ground until they could send in troops from other fronts and repel the attack. What if the Reds weren't privileged with the use of the railway network? Then the troops wouldn't have been able to get to Orel so quickly or easily and repel the attack and once again the Whites may have been able to implement an attack on Moscow. Other factors to consider are things such as the Reds having control of weapon producing factories and whether they would have been so effective in these battles without the factories or if the communications network broke down how they would co-ordinate these attacks/defences, all these advantages were gained because of the geography of Russia which is through no tactical brilliance of the Reds but just pure chance. Because of this I think its fair to say that the outcome of the civil war was as much to do with the factors leading to a Red victory as it is to do with why the Whites lost. ...read more.