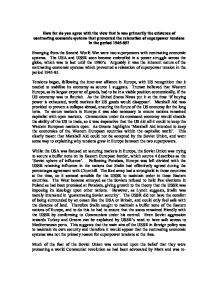 How far do you agree with the view that is was primarily the existence of contrasting economic systems that prevented the relaxation of superpower tensions in the period 1945-85?

How far do you agree with the view that is was primarily the existence of contrasting economic systems that prevented the relaxation of superpower tensions in the period 1945-85? Emerging from the Second World War were two superpowers with contrasting economic systems. The USA and USSR soon became embroiled in a power struggle across the globe, which was to last until the 1980's. Arguably it was the inherent nature of the contrasting economic systems which prevented a relaxation of superpower tension in the period 1945-85. Tensions began, following the inter-war alliance in Europe, with US recognition that it needed to stabilize its economy as source 1 suggests. Truman believed that Western Europe, as its largest exporter of goods, had to be in a viable position economically, if the US economy was to flourish. As the United States News put it at the time 'if buying power is exhausted, world markets for US goods would disappear'. Marshall Aid was provided to prevent a collapse abroad, ensuring the future of the US economy for the long term. To secure markets in Europe it was also necessary to ensure nations remained capitalist with open markets. Communism under its command economy would shackle the ability of the US to trade, so it was imperative that the US did all it could to keep the Western European markets open. ...read more.

Certain actions by the Soviets led the USA to believe that as source 2 suggest, the Soviet Union were intent 'on destroying' capitalism in their struggle for communist dominance across the world. The support of Communist regimes in Asia, the Middle East and Cuba was suggestive of the USSR's intention to promote what source 3 describes as 'the path from capitalism to socialism'. However, following Stalin's death the USSR moved towards 'peaceful coexistence' believing in the inevitable collapse of capitalism. This suggests that from the Soviet point of view, contrasting economic systems did not prevent the relaxation of super power tensions in the period 1945-85. The Berlin 'problem' is further evidence of the problems competing economic systems caused between the superpowers. Stalin's initial attempt to remove the West via the blockade of 1948, was based upon his fear of a new capitalist West German state being set up. Khrushchev's later decision to provide the West with an ultimatum in 1961, highlights how keen the USSR was to remove the West from Berlin. As source 5 shows, Khrushchev had to do something to 'control the movement between East and West Berlin'. The attraction of capitalism, inside the Communist state of East Germany, was threatening the existence of Communism, with people crossing the border in their hundreds. ...read more.

Although both communist states, Sino-Soviet relations had soured so much that fighting persisted along their shared borders. This split in itself is recognition that superpower tension was not only built upon contrasting economic systems. However, the tripartite order that then existed allowed for an improvement in relations between the USA and both China and the USSR during d�tente. The split allowed the USA to play off one communist superpower against the other as none could afford to alienate the USA so much that they formed an alliance with the other. In conclusion, the two contrasting economic systems alone do not cause such conflict between two nations. It was more the global nature of their politics which necessitated the advancement of their economic models across the globe which undoubtedly led to tension. The USA's need to secure world markets, was in direct opposition to Soviet insistence upon a sphere of influence in order to secure itself against further land invasion. The failure to communicate or to understand each others position is the main reason which prevented the relaxation of superpower tension in the period 1945-85. However, it is certainly true to say that to some extent the existence of contrasting economic systems prevented such a relaxation in tension. The emergence of China as a 3rd world player, and a move towards d�tente actually demonstrated that superpower tensions were relaxed at times, although not to a degree whereby you could suggest that the tensions no longer existed. ...read more.