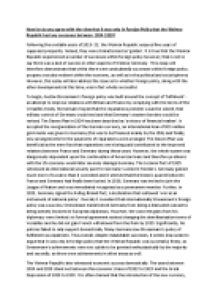 How far do you agree with the view that it was only in Foreign Policy that the Weimar Republic had any successes between 1924-1929?

﻿How far do you agree with the view that it was only in Foreign Policy that the Weimar Republic had any successes between 1924-1929? Following the unstable years of 1918- 23, the Weimar Republic enjoyed five years of supposed prosperity. Indeed, they were characterised as ?golden?. It is true that the Weimar Republic experienced a number of successes within foreign policy however; that is not to say there was a lack of success in other aspects of Weimar Germany. This essay will therefore demonstrate that whilst there were undoubtedly successes within foreign policy, progress was also evident within the economy, as well as in the political and social spheres. However, this essay will also address the issue as to whether foreign policy, along with the other developments at this time, was in fact wholly successful. To begin, Gustav Stresemann?s foreign policy was built around the concept of ?fulfilment? - an attempt to improve relations with Britain and France by complying with the terms of the Versailles treaty. Stresemann hoped that the reparations problem would be solved, that military control of Germany would end and that Germany?s eastern borders would be revised. The Dawes Plan in 1924 has been described as ?a victory of financial realism?. ...read more.

Heavy industry was able to recover quickly: by 1928, production levels had reached those of 1913. This was a result of more efficient methods of production, particularly in coal mining, and also because of increased investment. By 1929, exports were 40% higher than they had been in 1925 and hourly wages rose every year from 1924 to 1930. However, although there may have been some measure of prosperity, there was no ?economic miracle? in the late 1920s. Despite improvements in growth, the economy was still very unstable. Germany was falling behind the rest of the world, there was a growing trade and budget deficit and agriculture was depressed as prices continued to fall. Therefore, whilst success within the economic sphere was by no means unadulterated, it serves to dispute the notion that success only occurred with regards to foreign policy. Elsewhere, there were aspects of social progress in the years 1924 to 1929, evidenced by the improvements in advancements of welfare, housing as well as public health. The standard of living did improve for a number of Germans and considerable advances were made in social services. State governments, often using foreign loans, improved hospitals, schools, housing, roads and electricity supplies. However, high taxation and the redistribution away from the elites reinforced their suspicions of the new democratic regime. ...read more.

He also increasingly became the focus of powerful groups who wanted a more authoritarian system. Finally, the Reichstag parties were divided amongst themselves and Chancellors perennially fell over trivial issues such as the use of the imperial flag. In sum, though politics was characterised by series of unstable coalitions, the reduction in political violence is evidence of progress in the political sphere, again both disputing the notion that it was only in foreign policy that the Weimar Republic had any successes, as well as demonstrating the limitations of success. In conclusion, the evidence suggests that there were undoubtedly successes within foreign policy during these years. Stresemann?s policy of ?fulfilment? served to temporarily improve Germany?s economic situation as well as increase its international standing. However, Stresemann ultimately failed to rally support on the domestic front as he was portrayed as unpatriotic for succumbing to the demands of the Allied reparations. The evidence also demonstrates how currency stabilisation alleviated the economic anxiety created by hyperinflation, politics witnessed a period of ?calm? and elements of social progress also took place. However, ultimately, each of these successes was met by a comparative weakness not just in foreign policy, but in all aspects of the Weimar Republic during these years. Thus, the notion of a ?golden? period is often disputed by historians and, as Gustav Stresemann aptly declared, ?Germany [was] dancing on a volcano?. ...read more.