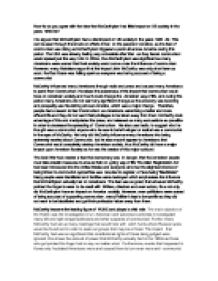 How far do you agree with the view that McCarthyism had little impact on US society in the years 1950-54?

How far do you agree with the view that McCarthyism had little impact on US society in the years 1950-54? It is argued that McCarthyism had a vital impact on US society in the years 1950-54. This can be seen through the knock on effects it had on the people in America, as the fear of communism was rising as McCarthyism triggered a panic all across America during this period. The USA was already feeling very vulnerable after War as they feared communism would spread just the way It did in China, thus McCarthyism was significant as many Americans were scared that their society would come under the influence of communism. However, many historians argue that the impact John McCarthy was only short term as soon; the Red Scare was falling apart as everyone was being accused of being a communist. McCarthy influenced many Americans through radio and press and caused many Americans to panic from Communism. He raised the awareness of the impact that communism could have on American society and how it could change the American way of life, and during this period many Americans did not want any significant change as the economy was booming and prosperity was flourishing all over America, which was a major change. ...read more.

Many people were blacklisted and families were destroyed which emphasises the influence that McCarthyism actually had on Americans. The fear was so great, that whoever McCarthy pointed the finger to were to be dealt with. Writers, directors and even actors, thus not only did McCarthyism have an impact on America socially. However, even politicians were scared of being accused of supporting communism, many Politian's kept a low profile as they did not want to be blacklisted and get their profession taken away from them. McCarthy became the leading figure of HUAC and played a vital role. The main objective of the HUAC was the investigation of un-American and subversive activities it investigated many left and right winged politicians and other suspects of communism. Furthermore, McCarthy had set up many meetings that would help with witch hunts where Russian spies would be found and in order to seek out groups that may be a threat. The impact that McCarthy had was so significant that constitutional rights of those being judged were ignored, this shows the amount of power that McCarthy actually had in the 1950s as those who got pointed the finger had no say no matter what. ...read more.

Therefore, McCarthyism was not a major turning point as the Alger Hiss Trial is what caused the fear of Communism to spiral around America and without this happening McCarthy would not have been able to take advantage of the situation. On the other hand some historians argue that the impact that McCarthy had on society was short lived. McCarthy started making ridiculous accusations on many people such as celebrities. McCarthy turned the fear of communism into a joke as he judged anyone and claimed they were a communist and things were just getting out of hand. Therefore, when Eisenhower came into power he pushed McCarthy's anti-communist regime away as it had caused a lot of corruption within America. Overall, it is clear that McCarthyism did have a major impact on American Society. He caused more awareness of Communist and had caused a major panic within America. Not only was he in charge of HUAC but he also became a major political figure and had gained a lot of support from many different groups. Although his communist regime was pushed aside he still was the fundamental cause of the fear of communist as he used strong propaganda in order to emphasise the danger of Communist. ...read more.