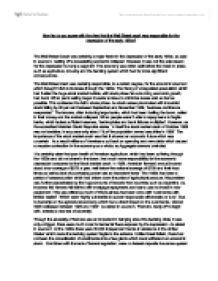 How far do you agree with the view that the Wall Street crash was responsible for the depression of the early 1930s? The Wall Street Crash was certainly a major factor in the depression of the early 1930s, as said in source 3, 'setting off a devastating economic collapse'. However, it was not the sole reason for the depression but only a segment. The economy was rotten well before the Crash in areas such as agriculture, industry and the banking system which had far more significant consequences. The Wall Street crash was certainly responsible, to a certain degree, for the economic downturn which brought USA to its knees through the 1930s. The frenzy of unregulated speculation which had fuelled the huge stock market bubble, with stock prices far outrunning economic growth, had burst. When panic selling began investor anxious to minimize losses sold as fast as possible. This quickened the fall in share prices. As stock values plummeted with industrial stock falling by 50 per cent between September and November 1929, 'business confidence evaporated'. ...read more.

As, incomes fell, farmers fell behind with mortgage repayments and loans used to invest in new equipment. This was critical as much of this business had been done with 'rural banks with limited capital'. Which were 'highly vulnerable to sudden large-scale withdrawals or runs'. Due to hardship on the agricultural economy which had a direct impact on the rural banks, 'almost 5000 collapsed between 1923 and 1930'. As stated in source 3, 'Farmers, badly off to begin with, entered a new era of adversity'. Though the adversity of farmers was an important in bringing about the banking crisis, it was only a trigger, there were much more fundamental flaws exposed by the depression. As stated in source 2, 'at the 1920s there were 30,000 independent banks in existence in the United States' which made the banking system fragile to the extreme. Unlike Great Britain, there had not been the consolidation of small banks into a few giants which could withstand an economic storm. Combined with the lack of federal regulation; were no federal deposits insurance system existed, the allowance of banks to make 'purely speculative loans' and hold 'limited capital' for security against shocks was an important element of the depression, and the severity of it. ...read more.

This is supported by source 3, which states, by the summer of 1932 imports and exports had dropped to only a third of 1929 levels. In essence the macroeconomic policies of Hoover, the president, and the republican administration were utter failures in stimulating the components of aggregate demand needed to combat the depression. Through its monetary policy of high interest rates, when low interest rates were need to encourage borrowing and spending; or its fiscal policy of rising taxes to pay for public spending, taking away money from consumers which needed to American goods for there to be growth. In conclusion the Wall Street Crash certainly contributed to the economic depression, but as D. McCoy said, 'it was more a trigger-one that was a symptom of deeper and more complicated causes'. He was referring to crippling state of American agriculture which left millions of Americans in poverty, the fundamental flaws of the banking system which collapsed when economic pressure was applied. However, the most important reason for the depression was the failure of the Republican government. To control an overheating economy, this now was trying to correct itself, with cataclysmic consequences for the economic welfare of the average American. ...read more.