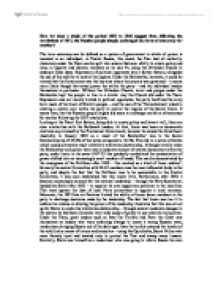 How far does a study of the period 1855 to 1956 suggest that, following the revolutions of 1917, the Russian people simply exchanged one form of autocracy for another?

How far does a study of the period 1855 to 1956 suggest that, following the revolutions of 1917, the Russian people simply exchanged one form of autocracy for another? The term autocracy can be defined as a system of government in which all power is invested in an individual; in Tsarist Russia, this meant the Tsar had all authority. Autocracy under the Tsars can be split into several features: ability to create policy and laws, to appoint and dismiss ministers as he saw fit, using the Orthodox Church to underpin these ideas. Repression of political opponents was a further feature, alongside the use of the nobility to control the regions. Under the Bolsheviks, however, it could be viewed that the Government was the key area where the country was governed - it seems more likely though that actual power lay within the party - and the individual leaders themselves in particular. Without the Orthodox Church, terror and purges under the Bolsheviks kept the people in line in a similar way the Church did under the Tsars. Repression was not merely limited to political opponents; the party itself and the army bore much of the brunt of Stalin's purges - and the use of the 'Nomenklatura' aided in creating a central core within the party to control the regions of the Soviet Union. ...read more.

In comparison Stalin also mounted the 'revolution from above' when he decided to enforce change on the peasantry and opt for rapid industrialisation through the command economy - Gosplan. Although there were attempts to modernise industry under Nicholas II in the 1890s with French investment, and Witte's Great Spurt, nothing compared to the scale of industrialisation under Stalin, which arguably changed the Soviet Union ultimately into a great power, something the Tsars never achieved. Though the scale and priority differed measurably, the fact that there were attempts at industrialisation under the Tsars illustrates the similarity in the two systems. The third major feature of autocracy under the Tsars was repression of political opponents. It featured internal and external exile, and a Secret Police - the Third Section under Alexander II, succeeded by the Okhrana which was established by the Statute of State Security under Alexander III, killing 14,000 opponents in its existence. Repression under the Bolsheviks shared many of the same characteristics: the secret Police (Cheka 1917-22, OGPU 1922-34 and NKVD 1934-1954), and similar exile processes. However, under the Tsars repression was largely only political; however Lenin and Stalin developed this theme with Religious repression with the Great Terror, continued until the re-opening of the Churches in the Great Patriotic War, and purges of the party and army under Stalin. ...read more.

of ranks, with accompanying benefits but as previously mentioned were at a higher risk of being attacked to show a lesson to others; and the system of privileges utilised the desire within the party to become one of the Nomenklatura, this ultimately kept everybody loyal to the leader. Overall it can be seen that although the Tsars and Bolsheviks were given support of different elite bodies, they served very familiar roles, so in that way they are similar. Finally, it can be easily seen that throughout the major features of the autocracy under the Tsars, there are stark similarities with the major features of the 'autocracy' under Lenin and Stalin. The concept that Stalin was a 'Red Tsar' can be thoroughly supported in terms of the amount of power they ultimately held, methods used to control the population for their individual means, ruthless repression of opponents and use of an elite to support their regime. The only real evidence to suggest there is nothing other than similarities between the two autocracies of the Tsars and Bolsheviks is the scale of their operations, particularly repression - however it is clear that the two systems share the same basis for repression, such as the existence of a Secret Police and exile. Lenin shares slightly fewer similarities with the Tsars, however ultimately his policies, too, were largely Capitalist for instance NEP. ?? ?? ?? ?? ...read more.