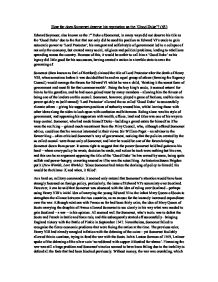 How far does Somerset deserve his reputation as the Good Duke? (Somerset (then known as Earl of Hertford) claimed the title of Lord Protector after the death of Henry VIII

How far does Somerset deserve his reputation as the 'Good Duke'? (45) Edward Seymour, also known as the 1st Duke of Somerset, in many ways did not deserve his title as the 'Good Duke' due to the fact that not only did he used his position as Edward VI's uncle to gain autocratic power as 'Lord Protector', his arrogant and selfish style of government led to a collapse of not only the economy, but created many social, religious and political problems, leading to rebellions spreading across the country. Because of this, it would be unfair to call him a 'Good Duke' as his legacy did little good for his successors, having created a nation in a terrible state to save the governing of. Somerset (then known as Earl of Hertford) claimed the title of Lord Protector after the death of Henry VIII, when sometime before it was decided that he and an equal group of others (forming the Regency Council) would manage the throne for Edward VI whilst he was a child, 'thinking it the surest form of government and most fit for that commonwealth'. Being the boy king's uncle, it seemed natural for him to be his guardian, and he had soon gained trust by many members - allowing him the favour of being one of the leaders on this council. Somerset, however, played a game of factions, and his rise to power quickly as (self-named) 'Lord Protector' allowed the so called 'Good Duke' to successfully alienate others - giving his supporters positions of authority around him, whilst leaving those with other ideas along the sides to look upon with confusion and bitterness. ...read more.

Chantries, which were used to pray for the souls trapped in Purgatory - a state between heaven and hell in Catholic belief - were dissolved, with these buildings turned into bookshops and other things. Although these changes were changing the appearance of Catholicism in England, Somerset seemed to have 'gotten away with it' so far, as although people were perhaps angry with the changes, a lot of people accepted the changes quietly - after all they were not too hard to live with. It can be argued that these policies were soft - and Somerset in a kind fashion had not introduced any cruel punishment to punish those who opposed his idea - which led a lot of Catholics to hide their churchly images in annoyance rather than rebellion. It was not until May 1549 that Somerset introduced the Book of Common Prayer, did he really have a huge impact in terms of the religious reforms. These books were a guideline of what was to be said at all church services, and were completely in English, which was a huge leap from catholic Services which were held in Latin. This change aimed to make churches simpler - less about money and the show of religion, but more about the faith - according to the most radical Protestants. If the Book of Common Prayer was in English, it would be easier for everyone to hear the messages of God in clear plain English, something Catholics disagreed with, as they thought only trained and blessed priests should have been able to read the bible. ...read more.

(Susan Brigden). This suggests that he was not as brutal as he was made out to be (normally because of his cruel Military regime against Scotland), another reason as to why he good have been considered 'Good' to an extent, as previous Monarchs/rulers weren't often praised with 'Oh the commons pray for you sir'. Also, he could also be compared to the Duke of Northumberland, who inherits his position as Lord Protector. Northumberland has been compared to being a typical 'Machiavellian' character - a person who stabbed the back of others to get what he wanted, and although reform was perhaps more effective under Northumberland, it would be unfair to, if talking in terms of morals, call Northumberland a better Duke than Somerset. Overall, there are some things supporting the argument that Somerset could be described as a 'Good Duke' if comparing him to Northumberland. Overall it would seem that Somerset did not deserve the title as the 'Good Duke' because of the overall negative effect he had in government, and his policies that failed to successfully bring religious reform in the country, whilst causing further economic damage due to his blind war expenditure from his obsession with the Scotland conflict. Somerset's overall attitude towards governing was also partly to blame - he created many enemies for himself due to making decisions on his own constantly, alienating certain members who would then plot against him and because of this, he would be solely to blame for the actions he took. Although he didn't mean to cause extra damage, it is undeniable that his actions proved that he didn't deserve to be called the 'Good Duke'. ?? ?? ?? ?? ...read more.