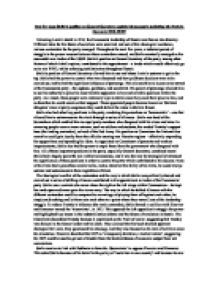 How far does Stalins position as General Secretary explain his success in defeating his rivals in the years 1924-1929?

How far does Stalin's position as General Secretary explain his success in defeating his rivals in the years 1924-1929? Following Lenin's death in 1924, the Communist leadership of Russia was thrown into disarray. Different ideas for the future of socialism were unveiled, and out of this ideological confusion, various contenders for the party emerged. Throughout the next five years, a turbulent period of struggle in the power vacuum between these contenders ensued, and Stalin eventually emerged as the successful new leader of the USSR. Stalin's position as General Secretary of the party, among other factors of which I shall explore, contributed to this appointment - a leader which would effectively go on to win WW2, whilst enforcing totalitarianism throughout Russia. Stalin's position of General Secretary allowed him to use and abuse Lenin's systems to get to the top. Stalin had the power to control what was discussed and how politburo decisions were to be carried out, and he had the significant influence of patronage. This allowed him to access every strand of the Communist party - the orgburo, politburo, and secretariat. His power of patronage allowed him to use his authority to place his most reliable supporters in key and enviable positions within the party. As a result, these people were extremely loyal to Stalin since they owed their place to him, and so therefore he could count on their support. These appointed people became known as 'Stalinist delegates' since at party congresses they could deliver the votes in Stalin's favour. ...read more.

Stalin suddenly went on to blast the NEP and favour rapid industrialisation and a force for the kulaks. To Trotsky, Bukharin's backing of the NEP suggested he was too capitalist and was neglecting the working class and undermining Communism. However, Trotsky's theory of permanent revolution also seemed too extreme. By Stalin differing his positions on the NEP through to the mid 1920s before deciding to rapidly industrialise at the end of the 1920s, he was supported by most of the party because he responded to the mood of the times and had loyal supporters. Stalin forced Bukharin to admit his political errors by accusing him of factionalism. This attacked Bukharin and his powerbase as party theorist and communications, which stopped not only Bukharin but also his allies Rykov and Tomsky. This resulted in a political structure which was entirely dominated by Stalinist delegates who ensured votes in Stalin's favour. Stalin's socialism in one country appealed to the nationalism of the party because it was focused on building a self sufficient Russia. Trotsky once said, 'the renovation of the party apparatus...must aim at replacing the mummified bureaucrats', suggesting that the party was becoming too bureaucratic and was losing the spirit of the revolution, and that it needed more democracy and openness. However, Stalin's political shrewdness and his strategic alliances resulted in him being the only credible person left to lead the Communist party, effectively having destroyed all other opponents. Another reason for the succession of Stalin to become Communist party leader is because he came out top when personal rivalries between the contenders occurred. ...read more.

He also had a revolutionary record and had Georgian proletarian roots, meaning he was not seen as a threat to cause splits in the party (unlike Trotsky). In conclusion, the 'grey blur' that was Stalin quietly defeated his major opponents and secured the leadership of the USSR until his death in 1953. He won the leadership struggle without the threat of gulags (political labour camps), imprisonment, or murder - his political prowess gained him victory among the other discussed factors. It would be ignorant to solely admire Stalin for his climb to power through his positions in the party such as General Secretary - he was helped along by luck - it was an advantageous time for Lenin to die. The weaknesses of opponents - Trotsky effectively led to his own demise. The help of early allies - Zinoviev and Kamenev were key to dismantling Trotsky. The ideological conflict - Stalin strategically shifted alliances to play off each contender with each other. The personal rivalries between contenders - Stalin's political cunningness undermined his opponents. The legacy Lenin left - Stalin was suited to bequeath the Russia he left behind. Lastly, the personal qualities of Stalin - he wasn't perceived as a threat until it was too late. However, his position as General Secretary was paramount to his rise despite these other factors, because it gave him the ability to appoint who he chose to the politburo and Sovnarkom. Without patronage, Stalin would have seriously struggled to gain the power of the USSR. His role as General Secretary ensured that Stalin could not be defeated politically in the struggle for power in the years 1924-1929. ...read more.