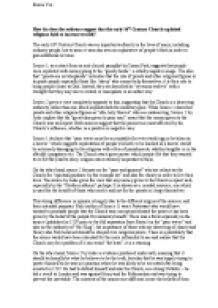 How far does the evidence suggest that the early 16th Century Church exploited religious faith to increase wealth?

﻿Emma Yeo How far does the evidence suggest that the early 16th Century Church exploited religious faith to increase wealth? The early 16th Century Church was an important authority in the lives of many, including ordinary people, but to some it was also seen as exploitative of people?s faith in order to gain additional revenue. Source 1, an extract from an anti-clerical pamphlet by Simon Fish, suggests that people were exploited with money going to the ?greedy horde?, a wholly negative image. The idea that ?priests are not shepherds? reiterates that the role of priests and other religious figures is to guide people especially those like ?sheep? who cannot help themselves; it is their role to bring people closer to God. Instead, they are described as ?ravenous wolves? with a strength that they may use to control or manipulate in an unfair way. Source 2 gives a view completely opposite to this, suggesting that the Church is a deserving authority, rather than one which exploits faith for monetary gain. ...read more.

There was a focus especially in the source (published in 1529 prior to the full separation from Rome) on the ?poor wives? and also on the authority of ?the King?; the importance of those who are deserving of charity and Henry who Fish believed should be obeyed over religious power. There is a possibility that the source would have been intended for the more influential to see and realise that the Church may be a problem if it can avoid ?the laws?, it is a warning. On the other hand, Source 2 by Aske is evidence produced under oath, meaning that it should technically be what he believes to be the truth, but also that he was largely trying to protect himself as he was in a position where he was likely to be executed after being arrested in 1537. He had to defend himself and also the Church, as a strong Catholic ? he led a revolt to London and was against Henry and the Reformation and was trying to prevent the inevitable. ...read more.

An alternative viewpoint is that the ?rest of my goods? is an incredibly high price, perhaps to the extent of being exploitation simply for prayers although obviously they had meaning to the woman ? the fact that there was nothing to be left to her family etc may be seen as exploitation, taking all that the woman has left to give in return for this service. The fact that someone was so willing to give up everything, even if it was when she had no use for it, simply in return for prayers and song shows that many people?s belief in religion was strong and real; to a greater extent than that of Source 2 ? Aske also had some ulterior motive, to protect himself after a rebellion. The overall view though as presented by the sources, is that for many people religion was incredibly important and on the whole the Church was not overly exploitative to increase it?s wealth as people wanted the services the Church could give. ...read more.