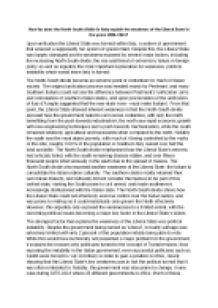 How far does the North-South divide in Italy explain the weakness of the Liberal State in the years 1896-1921?

﻿How far does the North-South divide in Italy explain the weakness of the Liberal State in the years 1896-1921? Upon unification the Liberal State was formed within Italy, a system of government that ensured a supposedly fair system of government. Despite this, the Liberal State was largely damaged and its weakness exposed by several major factors, including the increasing North-South divide, the rise and threat of extremism, failure in foreign policy as well as arguably the most important explanation for weakness: political instability which would leave Italy in turmoil. The North-South divide became an extreme point of contention for much of Italian society. The original unification process was headed mainly by Piedmont, and many Southern Italians could not see the difference between Piedmont?s ?unification? aims and colonisation of southern Italian states, and upon proclamation of the unification of Italy d?Azeglio suggested that the new state ?now?must make Italians?. From that point, the Liberal State showed inherent weakness in that the North-South divide exposed how the government failed to calm social contention, with only the north benefitting from the push towards industrialism; the north saw rapid economic growth with new engineering techniques and a push towards mechanisation, while the south remained relatively agricultural and backwards when compared to the north. Notably the south saw the most abject poverty, with much of it being controlled by the mafia or the elite; roughly 0.01% of the population in Southern Italy owned over half the land available. ...read more.

Another political failure that explains the weakness of government was the failure to come to an agreement with the Papacy, who influenced the large majority of the population. The formation of the Liberal State was rejected by Pope Pius IX, and Catholics were ordered not to participate in national elections, contributing to the divide between the ruling elite and the normal commoner who were unable to relate to the government, often choosing instead to follow Papal orders. Clearly this factor explains much more of the reasons to the Liberal State?s failure, as it exposes how the large majority of the Italian population were either unable to participate in government and be represented, or for the Liberal State to be completely ignored such as in the case of Papal intervention. Another important explanation for the failures in the Italian state was the threat of extremism. The Liberal government were frequently forced to introduce reforms such as limiting working hours and child labour in order to pacify supporters of more radical political parties such as the PSI, yet attempt to remain at a balance by introducing nationalistic education to appease the nationalists who yearned for a stronger Italian identity. From this, it is possible to see how extremism was in fact able to control much of the Liberal State?s policies; policies were no longer being made just to improve the lives of Italian?s, but also in a constant back and forth attempt to curb political extremism. ...read more.

This failure exposed another weakness in the Liberal State in the inherent inability to negotiate successfully on international tables, and was a trigger for the rising extremists that would take over the Italian state. While this ultimately was one of the triggers to the Liberal State?s downfall, underlying issues such as the inherent political instability can explain why foreign policy resulted in a failure, and also the reasons that extremism emerged within the Italian population. Therefore, foreign policy only contributes to a limited extent in explaining the failures of the Liberal State. Overall, it is possible to see that the most important factor and the factor that explained the failures to the largest extent was indeed ultimately political instability. Political instability as an underlying cause for failure provided a breeding ground for extremism to emerge, which only worsened the already existing problems faced by the Liberal State; the successive governments were constantly forced to pacify the demands of individuals on an entirely different end of the political spectrum which could only end in failure. This failure would later contribute to the assertive foreign policy which ironically showed the unassertiveness of the Liberal State when it came to international negotiations, and therefore clearly while the North-South divide does explain some of the failures of the Liberal State in governing Italy and improving general living conditions, ultimately all other factors were as a result of a general failure in politics: political instability. ...read more.