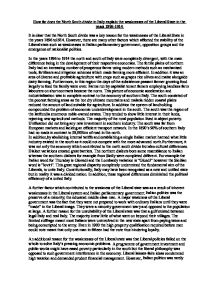 How far does the North South divide in Italy explain the weaknesses of the Liberal State in the years 1896-1914?

How far does the North South divide in Italy explain the weaknesses of the Liberal State in the years 1896-1914 It is clear that the North South divide was a key reason for the weaknesses of the Liberal State in the years 1896 to1914. However, there are many other factors which affected the stability of the Liberal state such as weaknesses in Italian parliamentary government, opposition groups and the emergence of nationalist politics. In the years 1896 to 1914 the north and south of Italy were completely divergent, with the main difference being in the development of their respective economies. The fertile plains of northern Italy had an increasing number of prosperous farms using modern methods such as mechanised tools, fertilisers and irrigation schemes which made farming more efficient. In addition it was an area of diverse and profitable agriculture with crops such as grapes rice olives and maize alongside dairy farming. Furthermore, in this region the days of the subsistence peasant farmer growing food largely to feed the family were over. Farms run by capitalist tenant famers employing landless farm labourers on short contracts became the norm. ...read more.

A further factor which contributed to the weakness of the Liberal state was as a result of inherent weaknesses in the Liberal system and Italian parliamentary government. Italian politics was the preserve of a minority; the educated middle class man. A major weakness of the Liberal government was the fact that they were not prepared to work with ordinary Italians until they were "made" in the Liberal image. They were a minority government wary and opposed to the population at large. A further reason for the unsuitability of the Liberal state was that a gulf existed between legal Italy and real Italy. The majority knew little of what went on beyond their villages. The limited suffrage meant most Italians were uninvolved in the new state apart from paying taxes and being conscripted to the army. Even in 1900 the high property qualification required before men could vote meant that only one man in fifteen had the vote thus hindering loyalty. An additional reason for the weaknesses of the Liberal state was that Liberal policies failed on the whole to solve Italy's pressing economic problems. ...read more.

The emergence of these new political groups all appealing in different ways to a new mass electorate meant that the liberal system of coalition politics based on narrow class interests and revolving around a few well know individuals became very difficult to sustain. Therefore, to conclude it is clear that the north south divide clearly played a major role in the instability of the Liberal state as it did not allow for Italy to progress as a united country, so hampered economic progression. However, the north south divide although important does not appear to be the main reason for the weaknesses of the Liberal State. The weaknesses of the Liberal state was due to a culmination of factors such as opposition groups and the emergence of nationalist politics with the main reason being inherent weaknesses in Italian parliamentary government. The weakness of the Liberal state was due to fundamental flaws within the Liberal system of government. Liberal politicians represented a narrow educated elite and their quarelling led to frequent changes in governement. A government unprepared to accept change and work with the people, for the good of the people was unlikely to succeed. ...read more.