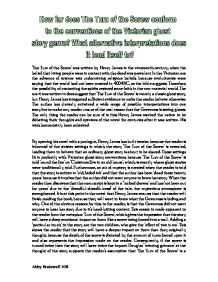 How far does The Turn of the Screw conform to the conventions of the Victorian ghost story genre? What alternative interpretations does it lend itself to?

'The Turn of the Screw' was written by Henry James in the nineteenth century, when the belief that living people were in contact with the dead was prevalent. In the Victorian era the advance of science was undermining religious beliefs, because evolutionists were saying that the world had not been created in 4004BC, as the bible suggests. Therefore, the possibility of contacting the spirits restored some faith in the non-material world. The era it was written in does suggest that 'The Turn of the Screw' is merely a classic ghost story, but Henry James has integrated sufficient evidence to make the reader believe otherwise. The author has cleverly entwined a wide range of possible interpretations into one storyline to make any reader unsure of the real reason that the Governess is seeing ghosts. The only thing the reader can be sure of is this; Henry James wanted the nation to be debating their thoughts and opinions of the novel for centuries after it was written. His wish has certainly been achieved. By opening his novel with a prologue, Henry James has built tension because the reader is informed of the sinister settings in which the story 'The Turn of the Screw' is revealed, leading them to believe that an ordinary ghost story is about to be shared. These settings fit in perfectly with Victorian ghost story conventions, because 'The Turn of the Screw' is told 'round the fire' on 'Christmas Eve in an old house', which is exactly where ghost stories were traditionally told. ...read more.

The metaphor used of being captain of the ship shows that she is responsible for everyone at Bly and that she is the force behind the events that are about to occur. Another metaphor used to indicate the Governess' authority is one that compares the Governess to the director of a play. When the Governess informs the reader that the 'curtain rose on the last act of my dreadful drama' it seems to the reader that for reasons unknown to them the Governess wants the dreadful occurrences to happen. This concept is given to them by the word 'my', because if she is the director of her 'dreadful drama' then she must be the force directing the terrible incidents and as a result wants them to happen. One of the reasons the Governess wants the ghosts to appear is due to her obsession with Miles' and Flora's beauty and charm. She wants to do everything in her power to suffocate them of the evilness that could lead to their corruption and as a result creates a threatening apparition in her mind to give her a reason to protect them. During the Governess' first meeting with Peter Quint, a man she believes to be the Master's dead valet, Henry James has developed the mysterious atmosphere created in the prologue. Despite the fact that this is the first ghost sighting in the book, it is the most controversial. ...read more.

Grose that she has spoken to her. Henry James has used the Governess' lies as a weapon against her to make the reader lose faith in her and what she is saying. As a result, the reader will start to believe that nothing the Governess says is true and the ghost sightings are all in her mind. Henry James' accurate factual evidence on the effects and causes of hysteria was influenced by Sigmund Freud, whose theory was that hysteria was provoked by an infatuation with a well-established male, like the Governess' obsession with the Master. The novel 'Turn of the Screw' conveys the devastating effects of one mentally unstable person and how they can corrupt and even end innocent lives. In conclusion, there is more evidence suggesting that the Governess was suffering from hysteria than there is to prove that it is a ghost story. Henry James has created this novel in defence of his own sister, who was prone to violent outbursts of hysteria. He wanted to show the sceptical Victorian nation how real the images could seem to the person seeing them, and therefore included pathetic fallacy and other various methods to demonstrate this and make the tale more believable. No matter how big the contrast is between two interpretations of 'The Turn of the Screw' the one thing all readers can agree on is this: Henry James has succeeded in manipulating the reader into believing anything he wants them to believe, which is indeed an great achievement. Abby Brakewell 10B ...read more.