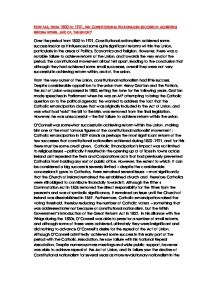 HOW FAR, FROM 1800 TO 1921, DID CONSTITUTIONAL NATIONALISM SUCCEED IN ACHIEVING REFORM WITHIN, AND OF, THE UNION?

HOW FAR, FROM 1800 TO 1921, DID CONSTITUTIONAL NATIONALISM SUCCEED IN ACHIEVING REFORM WITHIN, AND OF, THE UNION? Over the period from 1800 to 1921, Constitutional nationalism achieved some success insofar as it influenced some quite significant reforms within the Union, particularly in the areas of Politics, Economics and Religion. However, there was a notable failure to achieve reform of the Union, and towards the very end of the period, the constitutional movement all but fell apart, leading to the conclusion that although they had achieved some small successes, overall they were not very successful in achieving reform within, and of, the union. From the very outset of the Union, constitutional nationalism had little success. Despite considerable opposition to the union from Henry Grattan and the Patriots, the Act of Union was passed in 1880, setting the tone for the following years. Grattan made speeches in Parliament when he was an MP attempting to bring the Catholic question on to the political agenda; he wanted to address the fact that the Catholic emancipation clause that was originally included in the Act of Union, and was what had 'sold' the bill to the Irish, was removed from the final legislation. However, he was unsuccessful - the first failure to achieve reform within the union. O'Connell was somewhat successful in achieving reform within the Union, making him one of the most famous figures of the constitutional nationalist movement; Catholic emancipation in 1829 ...read more.