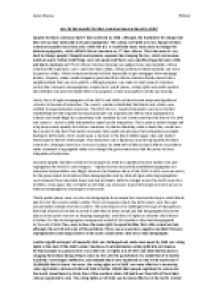 How far had equality for black Americans been achieved by 1968?

﻿Jesse Owusu History How far had equality for black Americans been achieved by 1968? Equality for black Americans hadn?t been achieved by 1968. Although, the foundation for change had been set up most noticeably in de jure segregation. The various civil rights acts now had given black Americans equality but strictly only within the law. It would take many more years to change the defacto segregation, which still left African Americans as 2nd class citizens. This is because it?s very hard to change people?s thoughts and opinions, opposed the changing the law, which can be done relatively easily. Before 1968 things were not equal at all there was a significant gap between white and black Americans as 57% of African American housing was judged to be unacceptable, African American life expectancy was 7 years less than whites, African American infant mortality was twice as great as whites, African Americans found it all but impossible to get mortgages from mortgage lenders, Property values would dropped a great deal if an African American family moved into a neighbourhood that was not a ghetto. Although progress was made in most areas of American society like: transport, desegregation, employment, public places, voting rights and public opinion. Nevertheless one area that made little to no progress or had no equality by 1968 was housing. ...read more.

The Greensboro sit-in challenged this type of inequality by then end of 1963 sit-ins had occurred in 200 cities as direct result 161 had desegregated but some places in the south were set on keeping segregation. Until the civil rights act of 1964 which forced a further 53 cities to desegregate consequently a total of 214 southern cities had desegregated by the end of 1965.They were to have the same rights to equal facilities that white Americans had although, the act did not solve all the problems. There was as expected a negative backlash from pro segregationist some shops/dinners in the south would rather close down than desegregate. Another significant aspect of inequality that was challenged and made more equal by 1968 was voting rights in the start of the 1960?s under Eisenhower?s administration voting rights did not improve for black people to a great extent. Even after his civil rights acts of 1957 and 1960 that focused on stopping the disfranchising of black voters by the with the punishment of a $1000 fine of 6 months in jail they were largely ineffective, only 800,000 black were registered to vote in the south out of 20,000,000 black citizens. However, the voting rights act of 1965 was more effective in increasing voter registration. Between 1965 and 1966 a further 230,00 black people registered to vote across the South. ...read more.

Finally, the census showed that 25 per cent of Americas black population lived in inner city areas in the USA ten largest cities these people were living in almost exclusively black areas due to the phenomenon of ?white flight?. Black campaigners put pressure on American politicians to try and solve these problems. By 1967 22 sates and eight cities had some form of fair housing laws. New York state and Massachusetts had comprehensive enforcement agencies dedicated to challenging discrimination in the housing market however the majority of these fair housing were largely symbolic. The 1968 fair housing act prohibited discrimination in 80 per cent of Americas housing market. However, congress had toned down the act and refused to set up an enforcement agency. Additionally, the maximum fine for racial discrimination in the housing market was a small sum of $1000. Consequently the act was ineffective deterrent to racism in the housing market. This was not equality in the housing market it did improve but not to an acceptable amount. In conclusion the civil rights movement transformed America by 1968 there had been a legal revolution segregation where it still remained was no longer backed by the law the federal government also had new powers to challenge racial injustices. However de facto change was not so comprehensive. Undoubtedly, the USA was a fairer and more equal that it had ever been but there was still a long way to go before all Americans could be considered equal. ...read more.