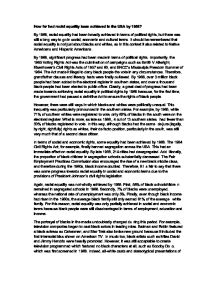 How far had racial equality been achieved in the USA by 1968?

How far had racial equality been achieved in the USA by 1968? By 1968, racial equality had been broadly achieved in terms of political rights, but there was still a long way to go in social, economic and cultural terms. It should be remembered that racial equality is not just about blacks and whites, as in this context it also related to Native Americans and Hispanic Americans. By 1968, significant progress had been made in terms of political rights. Importantly, the 1965 Voting Rights Act was the culmination of campaigns such as Smith V Allwright, Eisenhower's Civil Rights Acts of 1957 and 60, and SNCC's Mississipis Freedom Summer of 1964. The Act made it illegal to deny black people the vote in any circumstances. Therefore, grandfather clauses and literacy tests were finally outlawed. By 1968, over 3 million black people had been added to the electoral register in southern states, and over a thousand black people had been elected to public office. ...read more.

In terms of social and economic rights, some equality had been achieved by 1968. The 1964 Civil Rights Act, for example, finally banned segregation across the USA. This had an immediate effect on racial equality. By late 1956, 214 cities had desegregated. Additionally, the proportion of black children in segregation schools substantially decreased. The Fair Employment Practices Commission also encouraged the rise of a new black middle class, and therefore during the 1960s, black income doubled. Therefore, it is fair to say that there was some progress towards racial equality in social and economic terms due to the provisions of President Johnson's civil rights legislation. Again, racial equality was not wholly achieved by 1968. First, 58% of black schoolchildren remained in segregated schools in 1968. Secondly, 7% of blacks were unemployed, whereas the national rate of unemployment was only 5%. ...read more.

Native Americans and Hispanic Americans still suffered from racial discrimination by 1968. They had both benefited from President Johnson's civil rights legislation, and both communities had active civil rights campaigns. However, immigrant Hispanic farmworkers still did not qualify for the minimum wage. In many ways, racial minorities such as Native Americans and Hispanic Americans were still victims of prejudice in spite of the gains of the civil rights movement in the 1960s. In conclusion, racial equality had only been achieved to a limited extent by 1968. Although significant progress has been made since 1945 - both formally and in de facto terms - blacks, Native Americans and Hispanic Americans all still suffered from discrimination in terms of economic opportunities, educational provision and their portrayal in the media. The greatest gains were made in political rights, thanks to the Voting rights 1965, but even here minorities, particularly in the south, were still at a disadvantage in 1968. ...read more.