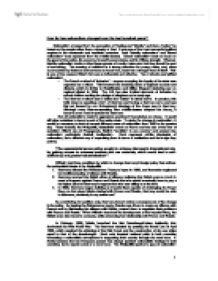 How far has nationalism changed over the last hundred years?

How far has nationalism changed over the last hundred years? Nationalism emerged from the perception of "feeling and "identity" and that a "nation" be based on the people rather than a dynasty or God. It was one of the most successful political engines in the nineteenth and twentieth centuries. Both "identity nationalism" and "liberal nationalism" were spawned from the middle-classes. Liberal nationalism tends to focus on the good of the nation, its economy, its world power status, and its military strength. Whereas identity nationalism tends to infect large groups of mostly males who feel they should be part of something. The wearing of uniforms is a strong attraction for young males, and, when accompanied by violence and someone to focus it on, becomes a stronger force in itself. This is one of the reasons Hitler's SA was so influential and effective. Two methods exemplified nationalism: - The French method of "inclusion" - anyone accepting the loyalty of the state was regarded as a citizen. This involved the breaking down of regional accents and dialects, which is similar to Russification and Gillian Shepard declaring war on regional dialect in 1994. The U.S has also implied elements of inclusion by school children reciting the pledge of allegiance at an early age. - The German method was to define the "nation" in ethnic terms. In practice, this boils down to speaking a form of German and having a German name and was first put forward by von Schoederer's ideology of the Aryan race in Germany. Although many German-speaking Slav middle-classes adopted the theory, it became even more important the Germans. Not all nationalisms result in aggressive practices if boundaries are drawn. It would still allow outsiders to become part of the nation-state. To study the change in nationalism, it would be necessary to look at several different cases of nationalism from 1890 to the present day. ...read more.

The industrial expansion sparked a unity among the Russian people to work together to make Russia a great nation once more. Propaganda was rife among the workers; Stalin perpetuated folk tales of men accomplishing tens times their quota of coal mined. Especially in the countryside, there was a sense of national, but not in a positive way. Many farmers who were more successful than others were labelled as "Kulaks" and were destroyed. They were believed to have strayed from the values of the revolution as they were beginning to comply with capitalist policies. The irony falls were Stalin's entire industrialisation policy fell into the category of capitalism. Oblivious to the fact, the Russian people were united to improve the Russian economy and world strength. This unity began to waver, however, during the Purges. Stalin felt that to strengthen the values and continuity of his "socialism in one country" policy he had eliminate those suspected of opposing it. He arrested 8 million people between 1936 and 1938 whom he considered to be enemies of the state. Stalin used the fear of being purged to unite Russia into increasing its industrial and military capabilities. What seems bizarre during this time was that despite wanting to strengthen the military he purged the most important members of the Red Army. It has been said that this was due to his increasing paranoia and that the Red Army's new found strength could over power him at some point, he therefore appointed Stalinists in their place. In 1941, the German began an invasion of Russia. This prompted the entire Russian population to work to defend their country. This largely involved an increase in industrial quotas, which was now, completely devoted to mobilisation of the Army. Propaganda was increased to insight shear hatred towards the Germans among the population and formed part of the "Great Patriotic War". Such elements increased the work ethic through fear if nothing else. ...read more.

Unfortunately the Second World War drained their resources. However he did impose seriously extreme right wing policies in his civil duties during the purges and the way each Five Year Plan was administered. Post Second World War, nationalism has somewhat become insignificant in the Western world and has developed into a sort of liberal patriarchy in most forms during periods of war. The 1960s preached peace and love, which has almost been administered within society as most military excursions are condemned by society. This liberal patriarchy has its extremes: namely soccer hooligans. It seems futile to compare it with Mussolini, Hitler and Stalin, but forms an important continuation of nationalistic views. Mussolini himself, dwelled on Italy's sporting triumphs as a means of dominating the world, but nowadays this becomes less important. Hooliganism forms within a small minority of soccer fans and is a logical continuation of the nationalism of the early part of the century, as it has caused so much grief and angst. Nationalism tends to dwell in small corners of the Western world today, as most of society view the world equally in a much more liberal environment than the past. However, as Benito Mussolini claimed, nationalism is a part of everyone and lies subconsciously, waiting to be woken. i Paul A. Papayoanou, "Independence, Institutions, and the balance of Power: Britain, Germany, and World War I", 1996 ii The Road to Armageddon iii George Orwell, Notes on Nationalism, 1945 iv George Orwell, Notes on Nationalism, 1945 v ibid vi Joseph Stalin, 1928 vii Adolf Hitler, Mein Kampf. viii A New World Textbook, 1934 ix J. Williams et al. British football and social change: getting into Europe. 1991 x A. J Haley British soccer hooliganism: emergence and establishment. 2000 xi P. Murphy et al. Football on trial: spectator violence and development in the football word. 1990 xii Martin Asser BBC News Online - Europe's hooligans from abroad. 2000 xiii Martin Asser BBC News Online - Europe's hooligans from abroad. 2000 xiv Andrew Matthews ?? ?? ?? ?? 1 ...read more.