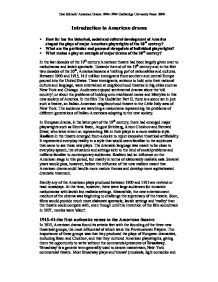 How far has the historical, social and cultural development of America shaped the plays of major American playwrights of the 20th century?

Introduction to American drama * How far has the historical, social and cultural development of America shaped the plays of major American playwrights of the 20th century? * What are the particular and personal viewpoints of individual playwrights? * What makes a play an example of major drama of the 20th century? In the last decades of the 19th century American theatre had been largely given over to melodramas and lavish spectacle. Towards the end of the 19th century and in the first two decades of the 20th, America became a 'melting pot' of nationalities and cultures. Between 1900 and 1915, 14.5 million immigrants from southern and central Europe poured into the United States. These immigrants, anxious to hold onto their national culture and language, were entertained at neighbourhood theatres in big cities such as New York and Chicago. Audiences enjoyed sentimental dramas about the 'old country', or about the problems of holding onto traditional mores and lifestyles in this new society of America. In the film The Godfather Part II, there is a scene set in just such a theatre, an Italian-American neighbourhood theatre in the Little Italy area of New York. The audience are watching a melodrama representing the problems of different generations of Italian-Americans adapting to the new society. In European drama, in the latter part of the 19th century, there had emerged major playwrights such as Henrik Ibsen, August Strinberg, Anton Chekhov and Bernard Shaw, who were intent on representing life in their plays in a more realistic style. ...read more.

Eliot and Dos Passos became spokesmen for the 'lost generation', a term used to describe those who had been disoriented by their experience of the First World War and who felt ill at ease in the midst of what they saw as the grossness and callousness of the post-war world, with its emphasis on production and the acquisition of wealth. Modernism as a movement in the arts had had an impact in Europe from the 1880s on. Modernism grew out of this increasing alienation of artists from mainstream society with its ever-increasing regimentation, socialisation, urbanisation and consumerism. One of the essential characteristics of modernism was opposition to these materialistic and authoritarian aspects of modern society. Modernism seemed to advocate escape from the encroachments of a mass society that required its citizens to conform to a rigid work ethic. Not all modernists were on the left of the political divide, however. Some, for example, the poets Ezra Pound and T.S. Eliot, were politically conservative. American drama would produce several major figures during this period, some of whom would be dubbed 'modernist' and who would reflect in their plays the turmoil of these years. Dramatists would deal with new subject matter and themes, experiment with form and language, apply innovative theatrical techniques, break away from the straitjacket imposed by realism and create 'expressionist' drama. Expressionism was a movement in painting at the beginning of the 20th century in which artists, rather than attempting to create a version of 'reality', created a highly personal vision of the world that included distorted images symbolising inner psychological states. ...read more.

Many American writers of this era were concerned at the increasing emphasis on materialism and consumerism at the expense of developing a just and more equal society. Willy's wife, Linda, says of him: 'He's not the finest character that ever lived. But he's a human being and a terrible thing is happening to him. So attention must be paid'. Miller's humanist values shine through the thematic content. Salesman has been called 'a tragedy of the little man'. A feminist view of the play, however, might well be that it is a very male-dominated world that Miller represents with the concerns of Linda, the wife, portrayed only in relation to Willy and the sons, but otherwise sidelined. However, that may be imposing a contemporary reading on a play that was written in the 1940s when the issue of feminism would have been less to the fore than it is nowadays. Very few people in 1949 would have questioned how the wife's concerns were represented in the play. Fifty years and more later, the play can be seen in the light of half a century of feminist advance and the dramatic function of the wife figure re-evaluated. The issue of whether American drama has consistently failed to represent women and their experience of American life adequately is open to debate. 1960-90: fragmented drama in a fragmented society The historical, social and cultural context The 1950s id often regarded as a period of relative calm before the storm that broke over American society in the 1960s and 1970s. American dramatists would chronicle the maelstrom that America became in these decades. Don Schiach/ American Drama 1900-1990/ Cambridge University Press: 2000 ...read more.