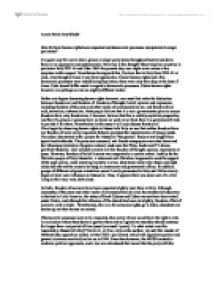 How far have human rights been respected and democratic processes manipulated in single part states?

Lamin Brima Ray Khadar How far have human rights been respected and democratic processes manipulated in single part states? It is quite easy for one to take a glance at single party states throughout history and deem them all as oppressive and undemocratic. How true is this though? Observing two countries in particular Italy 1922-45 and Cuba 1961-the present-day, one might come across a few surprises in this respect. Nonetheless having said this, I believe that in Italy from 1923-45 at least, even though at times it may have appeared as if some human rights and a few democratic processes were indeed being kept intact, these were only skin deep at the best of times. Cuba doesn't differ much in regard to democratic processes. Cuban human rights however, are perhaps an ever so slightly different matter. Before one begins discussing human rights however, one must first make the distinction between freedom to and freedom of. Freedom of thought, belief, opinion and expression, including freedom of the press and other media of communication etc. and freedom from cold, starvation, sickness etc. ...read more.

In addition, groups of different religious orientation weren't really persecuted in Italy until Hitler slowly began to have more influence on Mussolini. Thus, it appears there was some sort of a silver lining in this very, very, dark cloud. In Cuba, freedom of seems to have been respected slightly more than in Italy. Although censorship of the press and other media of communication do exist, the standard of education is the best in Latin America, the status of black Cubans and Cuban women have been raised under Castro, and although the influence of the church has been cut slightly, freedom of belief seems to exist in Cuba. Nevertheless, this is as far as human rights go in Cuba; dissidents are beaten up ant their homes are ruined. If democratic possesses were to be respected, then every citizen would have the right to vote in an election whom they desire to govern them and no legislative assembly should continue for longer than a set period of time (usually around 5 years). To what extent was this respected in Mussolini's Italy? ...read more.

Before Mussolini came to power two of the policies of the fascist movement were firstly to cutback the voting age to 18, and secondly to demand universal suffrage. So we can now see clearly that Mussolini had abandoned his ideals, and democracy was effectively trashed. Democratic processes in Cuba were "respected" to a similar extent. Castro ignored Cuba's constitution for 36 years, declaring it out of date. Then when he finally drafted some sort of constitution again, the "popular people's power movement", voters could only elect candidates approved by the communist party, and only to the local government. Thus, democracy under Castro seems to be equally non-existent. In conclusion, how far have human rights been respected and democratic processes manipulated in Italy under Mussolini and Cuba under Castro? It has become apparent that in Cuba human rights records, although most definitely not magnificent aren't as bad as it was in Italy under Mussolini. Nevertheless, overall human-rights processes in single party states most definitely do seem to have an abysmal record. As for democratic processes, these have hot been respected at all and if they were it was barely even skin deep. ...read more.