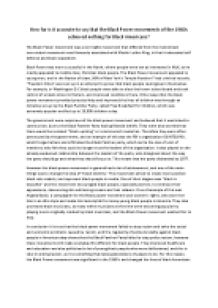 How far is it accurate to say that the Black Power movements of the 1960s achieved nothing for Black Americans?

﻿How far is it accurate to say that the Black Power movements of the 1960s achieved nothing for Black Americans? The Black Power movement was a civil rights movement that differed from the mainstream non-violent movement most famously associated with Martin Luther King, in that it advocated self defense and black separatism. Black Power was more successful in the North, where people were not as interested in MLK, as he mostly appealed to middle class, Christian black people. The Black Power movement appealed to young men, and in the Nation of Islam, 90% of New York?s Temple Number 7 had criminal records. ?Freedom Cities? were set up in an attempt to prove that black people could govern themselves. ...read more.

They were also worried that there would be a violent ?black uprising? or a communist revolution. Therefore they were often persecuted by the government, and an example of this was the FBI?s organisation COINTELPRO, which forged letters and infiltrated the Black Panther party, which led to the loss of a lot of members, who felt they could no longer trust the leaders of the organisation. It also played on the already weakened relationship between the leaders of the party, who disagreed about the way the party should go and what they should focus on. This meant that the party disbanded by 1977. However the black power movement in general had a lot of achievement, and one of the main things was to change the idea of ?black identity.? The movement aimed to create more positive black role models, and represent black people in media. ...read more.

They also promoted black musicians, as many white musicians at the time were becoming popular by playing music originally created by black musicians, and the Black Power movement wanted this to stop. In conclusion it is true that the black power movement failed to stop racism and solve the social and economic problems caused by racism, and the regularity of police brutality against black people in America today shows that the Black Panther Party failed to stop police racism, however these movements still made everyday life different for black people. They improved healthcare and education and also politicised a lot of young black people who were disillusioned, and this is vital in ending racism, as it is something that takes generations of people to do. For this reason, the Black Power movement was significant in the 1960?s and changed the lives of black Americans. ...read more.