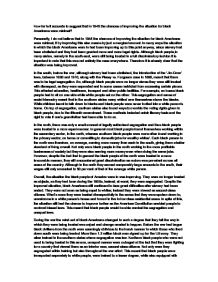 How far is it accurate to suggest that in 1945 the chances of improving the situation for black Americans were minimal?

How far is it accurate to suggest that in 1945 the chances of improving the situation for black Americans were minimal? Personally, I do not believe that in 1945 the chances of improving the situation for black Americans were minimal, if by improving this also means by just a marginal amount. In many ways the situation in which the black Americans were in had been improving up to this point anyway, since slavery had been abolished and they had been granted more and more legal rights. Although black people, in many states, namely in the south-east, were still being treated in a full discriminatory fashion it is important to note that this was not entirely the case everywhere. Therefore it is already clear that the situation was being improved. In the south, before the war, although slavery had been abolished, the introduction of the 'Jim Crow' laws, between 1890 and 1910, along with the Plessy vs. Ferguson case in 1896, meant that there was to be legal segregation. So, although black people were no longer slaves they were still treated with disrespect, as they were separated and in some cases restricted from accessing certain places. This effected education, healthcare, transport and other public facilities. For example, on buses black people had to sit on one side while white people sat on the other. ...read more.

In spite of this, the situation still had the chance to improve further as the American Constitution enabled people to confront biased laws. This meant that black people would be able combat the segregation and unequal laws. During the war the mind-set of black Americans changed to such a degree that they felt the way in which they were being treated was unjust and change needed to happen. Before the war had begun black civilians from the north were seemingly oblivious to the harsh manner in which those who lived down south were being treated. More than 1.2 million black men signed up for the US army. They often trained in the southern states where segregation was law. Northern black people who were not used to being treated in this severe, unequal manner were outraged at the fact that they were fighting for a country that viewed them as an inferior race, second-class citizens. Not only were they segregated within training but also throughout the war effort. This meant that black people were transported separately to white people, were trained to a lesser degree, while also equipped with substandard weapons. Not only were they mistreated on the battlefield but often they weren't even given the opportunity to fight for their country, instead they did domestic jobs, cooking and cleaning. ...read more.

A. Philip Randolph also showed that if the government were to be pressurised in the future positive changes could be made. Politically, there was also a huge change during the war effort. In the south more and more black Americans were allowed to vote. The figure rose from being 2 per cent of the southern black population to 15 per cent. By 1945 around the north had also made a political advance to such a stage at which black people had an equal right to vote. Black Americans were also gaining positions in the government. In southern states the social conditions during the war remained the same. There was still widespread racism which resulted in the segregation law continuing to prevail. But, northern progression was such that many facilities and transportation systems were segregation free and there was more mixing of races. One problem that did seem to be rather prominent was that the fact that the black population as whole were poorer they were forced to live in the low class residential and undesirable areas. Overall the war was a huge turning point in the advancement of black rights. It created a reduction in racism and an increase in the number of black activists. Putting pressure on the government also showed that change could happen. So at the end of the war effort it was clear that people were now seeing more chances of improving the African-American situation. ...read more.