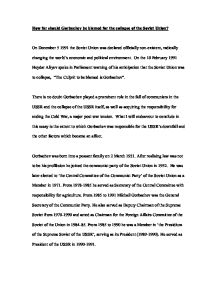 How far should Gorbachev be blamed for the collapse of the Soviet Union?

How far should Gorbachev be blamed for the collapse of the Soviet Union? On December 5 1991 the Soviet Union was declared officially non-existent, radically changing the world's economic and political environment. On the 10 February 1991 Heydar Aliyev spoke in Parliament warning of his anticipation that the Soviet Union was to collapse, "The Culprit to be blamed is Gorbachev". There is no doubt Gorbachev played a prominent role in the fall of communism in the USSR and the collapse of the USSR itself, as well as acquiring the responsibility for ending the Cold War, a major post-war tension. What I will endeavour to conclude in this essay is the extent to which Gorbachev was responsible for the USSR's downfall and the other factors which became an affect. Gorbachev was born into a peasant family on 2 March 1931. After realising law was not to be his proffesion he joined the communist party of the Soviet Union in 1952. ...read more.

The Russian citizens were highly attentive when in 16 December1986 Gorbachev released the father of the atomic H-bomb from exile and later released political prisoners. Gorbachev told the Central Committee who elected him that when the people are elected, "the more consciencely they act, the more actively they support the party" (Steven White). With the knowledge of the past- information to define the good and the bad actions of the Soviet Union he believed the people would make a concerted effort in restructuring the economy and participating in reforming their country. Many a critic views glasnost as fundamental in the USSR collapse. For seventy years the Soviet Union had withheld information and in doing so upheld their power, Gorbachev believed a slow, judicious release of information would jump start productivity and dig out the bureaucracy preventing economic growth. A catalytic factor in the downfall of the regime in favour of the newly available 'information'. ...read more.

Gorbachev found himself answering to protests rather than introducing reform, yet the more democracy that was introduced the greater demand there was for reform. Furthermore the Baltic nations now had a larger voice emphasising the case for the Soviet Bloc independence, the democratic rule contradicted the venture to disallow their independence. Gorbachev believed, as he did with glasnost, democratisation would aid the legitimisation of the Communist Party's power. = Anticipating the Collapse of the Soviet Union Heydar Aliyev's Speech February 10, 1991 The culprit to be blamed is Gorbachev, who seized the power of the Central Committee of the Soviet Party along with all the power of the government. During the past five years, Gorbachev has made so many promises to the nation but has kept none of them. There is a void between word and action, and a gap between political leadership and the nation. This has resulted in skepticism and disbelief in the government and the people's disappointment in the future has increased to the extent that the influence of the Communist Party doesn't exist any more. ...read more.