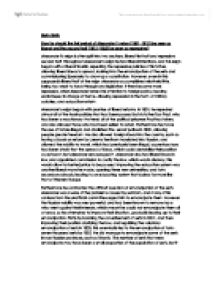 Holly Blyth How far should the first period of Alexander I's reign (1801-1815) be seen as liberal and the second half (1815-1825) be seen as repressive? Alexander I's reign is often split into two sections, liberal first half and repressive second half. Throughout Alexander's reign he had liberal intentions, and his reign began with a liberal flourish, repealing the repressive policies of his father, allowing liberal ideas to spread, looking into the emancipation of the serfs and commissioning Speransky to draw up a constitution. However, even in this supposedly liberal half of the reign Alexander accomplished relatively little, being too weak to force through any legislation. It then became more repressive, when Alexander turned his attention to foreign policy, leaving Arakcheyev in charge at home, allowing repression in the form of military colonies, and education reform. Alexander's reign began with promise of liberal reforms. In 1801, he repealed almost all of the harsh policies that had been passed by his father Tsar Paul, who had been a reactionary. He freed all of the political prisoners Paul had taken, and also allowed those who had been exiled to return. Furthermore he made the use of torture illegal, and abolished the secret police in 1802, allowing people greater freedom. He also allowed foreign ideas into the country, such as having a book on reform by Jeremy Bentham translated into Russian, and ...read more.

Alexander did implement some of Speransky's policies, for example the reorganisation of government ministries. Some of the existing ministries were abolished, such as the ministry of commerce, while the ministries for the army and navy were combined, and others were reformed. Also the council of state, which had been part of Speransky's proposal, was made the chief advisory to Alexander. Even though he could ignore their advice it was a step towards liberal reform. However, as Alexander became more involved in foreign policy he became less and less interested with the situation at home. He had been crucial in bringing down Napoleon, which had given him a sense of a divine mission to accomplish in Europe. Also his involvement in the putting down of Napoleon made him fear the liberal ideas which he had previously liked. This led to an increase in censorship and an increasing influence from the Orthodox Church. Consequently, literature, poetry and theatre amongst other things were made illegal, and the secret police was expanded to enforce the censorship. Education, which he had expanded early in his reign was repressed, he appointed Golitsyn, who had been the over procurator on the holy synod, meaning he was deeply religious. He believed that devout orthodoxy was the remedy to liberal ideas and was interested in getting as many Russians to read the bible for themselves so that they would reject liberal ideas. ...read more.

Furthermore, at the time of his death he was still considering the emancipation of the serfs, and the plans for a constitution had not been completely shelved, they had just taken a back seat, as the growing unrest and wave of revolutions across Europe pushed him further into his position as an autocrat. In conclusion Alexander was full of ideas of how to reform Russia, but he was torn between his position as an autocrat, and his liberal intentions, which created an indecisive monarch who was too weak to force through his liberal ideas. The liberal flourish at the beginning of his reign was not followed up with results, and projects that were started in his liberal period were never completed or thrown out, for example, codifying the law and Speransky's constitution. His main problem was that he became distracted by foreign affairs, spending large amounts of time abroad, leaving ministers with instructions which they wrongly interpreted, leading to repressive policy such as schools, and the military colonies. It is true that he himself did become more reactionary, as he saw countless monarchs suffer revolution and overthrow in Western Europe, and he desired theses ideas to be crushed, as he had no wish for such action to happen in Russia. Overall the first part of his reign his liberal intentions shone through but came to little actual change, but in the second half it was tainted by his fear, and his lack of involvement in domestic policy. ...read more.