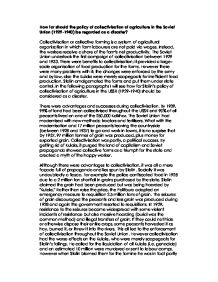 How far should the policy of collectivisation of agriculture in the Soviet Union (1929-1940) be regarded as a disaster?

The seizures of grain discouraged the peasants and less grain was produced during 1928 and again the government resorted to requisitions. In 1929, resistance to the seizures became widespread with some violent incidents of resistance but also massive hoarding (burial was the common method) and illegal transfers of grain. If they could not hide or otherwise dispose their entire crops, some peasants harvested it as hay, burned it, or threw it into the rivers. This all led to the enforcement of collectivisation throughout the Soviet Union. However collectivisation had the worse effects on the Kulaks, who were merely scapegoats for Stalin's failings. He called for the liquidation of all Kulaks (i.e. genocide) and an estimated 10 million were murdered or sent to labour camps. However when Stalin blamed them for the famine he was in fact partly correct. Many Kulaks burned their own crops and killed livestock so as not to appear a Kulak. ...read more.

If the people had supported it the "Kulaks" would not have been persecuted, there would not have been a famine and millions would not have died. So in answer to the question: how far should the policy of collectivisation of agriculture in the Soviet Union (1929-1940) be regarded as a disaster? I believe that we should not consider collectivisation an absolute disaster; it certainly achieved its primary aim of consolidating individual land and labour. By 1939, 99% of land had been collectivised which is certainly an impressive feat. However one must remember that it was a social catastrophe; nearly 20 million men and women died, a whole class of people were wiped out and there was starvation throughout the whole of the Soviet Union. One must remember that the systematic killing of people on a massive scale outweighs all achievements. An example of the losses sustained from collectivisation and the famine in Soviet Ukraine alone is: "Imagine the Titanic sinking every day for thirteen years; such were the losses from the 1933 Famine Genocide in Soviet Ukraine!" Melanie Bobrowski ...read more.