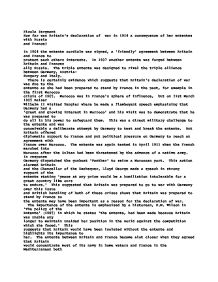 How far was Britain's declaration of war in 1914 a consequence of her ententes with Russia and France?

Nicola Sergeant How far was Britain's declaration of war in 1914 a consequence of her ententes with Russia and France? In 1904 the entente cordiale was signed, a 'friendly' agreement between Britain and France to protect each others interests. In 1907 another entente was forged between Britain and Frances ally Russia. The triple entente was designed to rival the triple alliance between Germany, Austria- Hungary and Italy. There is certainly evidence which suggests that Britain's declaration of war was due to the entente as she had been prepared to stand by France in the past, for example in the first Morocco crisis of 1905. Morocco was in France's sphere of influence, but on 31st March 1905 Kaiser Wilhelm II visited Tangier where he made a flamboyant speech emphasising that Germany had a 'great and growing interest in Morroco' and his visit was to demonstrate that he was prepared to do all in his power to safeguard them. This was a direct military challenge to the entente and was conceivably a deliberate attempt by Germany to test and break the entente. But Britain offered diplomatic support to France and put political pressure on Germany to reach an agreement with France over Morocco. The entente was again tested in April 1911 when the French marched into Morocco after the Sultan had been threatened by the advance of a native army. ...read more.

On 4 August 1914 Britain declared war on Germany after the invasion of Belgium and failure to respond to a telegraph asking Germany to withdraw. But if Britain's decleration of war was a consequence of her ententes she would have been expected to declare war on 3 August when Germany declared war on France. The fact that she hesitated suggests the entente was not Britains only motive for entering the war and her actions demonstrate that the issue of Belgium was an important reason for entering the war. The invasion of Belgium helped to swing public opinion in Britain in favour of a war. On the morning of 2 August 1914 thousands of people demonstrated in Trafalgar Square against what they saw as a war for the sake of France or Russia. But public mood changed when they discovered Germany was threatening to invade Belgium and it could therefor be argued that Belgium neutrality was more of an important reason for joining the war than the triple entente. The importance of Belgium is highlighted in a speech by Lloyd George, 28 February 1915, 'We are bound by honourable obligations to defend the independence, the liberty, the integrity of a small neighbour that has always lived peacefully.' This speech is ultimately saying that Britain is moraly obliged to fight for the sake of Belgium. But Belgium was also of interest to Britain because of the small stretch of channel between them, if Germany was to invade Belgium she ...read more.

For example the death of king Edward VII on 6 May 1910 which had shocked the nation and for many people had marked the end of a British era of supremacy. As well as the suffragettes movement whose campaigns for votes for women had become increasingly violent since 13 October1905 when two young girls interupted a liberal meeting addressed by sir Edward Grey and were later charged with assult . Historians views largely suggest that the ententes with France and Russia were not the main reason why Britain entered the war. The entente with Russia seems to be of little consequence and although the entente with France certainly influenced the decision to declare war there were other important factors such as British insecurity and fear towards Germany aswell as a British fear of being isolated and hated if they didn't join the war. The invasion of Belgium was also an important factor as it helped to sway public opinion in favour of a war. It is also concievable that if France and Germany had been on another continent Britain may not have got envolved in the war at all suggesting that the close proximety of France and Germany was also an important factor. and a feeling that Britain wanted to keep France strong and Belgium neutral in order to maintain a 'buffer' between Britain and Germany. So although the entente with France was a factor which influenced the decision to declare war there were other issues which were equally important and they all contributed to the declaration of war. ...read more.