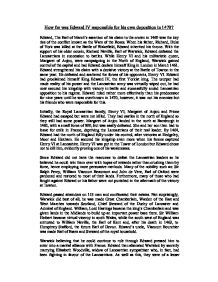 How far was Edward IV responsible for his own deposition in 1470?

How far was Edward IV responsible for his own deposition in 1470? Edward, The Earl of March's assertion of his claim to the crown in 1460 was the key rise of the conflict known as the Wars of the Roses. When his father, Richard, Duke of York was killed at the Battle of Wakefield, Edward inherited his throne. With the support of his older cousin, Richard Neville, Earl of Warwick, Edward defeated the Lancastrians in succession to battles. While Henry VI and his militaristic queen, Margaret of Anjou, were campaigning in the North of England, Warwick gained control of the capital and had Edward declare himself King in London in March 1461. Edward strengthened his claim with a decisive victory at the Battle of Towton in the same year. He defeated and scattered the forces of his opponents, Henry VI. Edward had proclaimed himself King Edward IV, the first Yorkist king. The usurper had made reality of his power and the Lancastrian army was virtually wiped out, he had now secured his kingship with victory in battle and successfully ended Lancastrian opposition to his regime. Edward ruled rather more effectively than his predecessor for nine years until he was overthrown in 1470, however, it was not his enemies but his friends who were responsible for this. ...read more.

Edward's uncle, Viscount Bourchier was made Earl of Essex and Steward of the royal household. Warwick believing that he could continue to rule through Edward pressed him to enter into a marital alliance with France. Edward then alienated Warwick by secretly marrying Elizabeth Woodville, widow of Lancastrian sympathiser who, in fact, had been fighting in favour of the Lancastrians. As well as this, they were of a lesser nobility and she also brought her extended family into the royal family this eventually led them to claim patronage. The Woodville family had dominated the marriage market since the Earls of Arundel, Essex and Kent married their heirs to Woodville wives. Edward's brothers, George and Richard were the only great men left for Warwick's daughters but Edward did not allow this. Elizabeth's son married Anne Holland, the heiress of the Duchy of Exeter but Warwick's nephew however had been arranged to marry her. This led to the final split between Edward and Warwick. Warwick had been negotiating with Louis XI, the king of France to marry Bona of Savoy, the king's sister-in-law. This was intended to prevent a Lancastrian alliance with the French and therefore the Yorkists would gain French support. ...read more.

This time they were defeated and forced to flee to France. There, they made an alliance with Margaret of Anjou, and Warwick agreed to restore Henry VI in return for French support in an invasion, which took place in late 1470. This time, Edward was forced to flee when he found out Warwick's brother, John Neville, had also switched to the Lancastrian side, making his military position untenable. Henry VI was restored to the throne. This was the only time in English history that a King had been deposed and later restored. Edward is to blame for his deposition. The end of his reign was to some extent inevitable. Edward established a powerful regime and there seemed little chance of Henry VI regaining the throne but the fact that Henry VI and his family had escaped and still had power in the north definitely led to Edward's predicted deposition. On the other hand, Edward's weakness was his gullibility of confidence. He should have executed Henry VI when he had the chance to, instead of lodging him up in the tower of London; this was Edward's first mistake. Additionally, Edward should have been more aware of Warwick's ambitious nature which later led the Lancastrians to victory and resulted in his own deposition. ...read more.