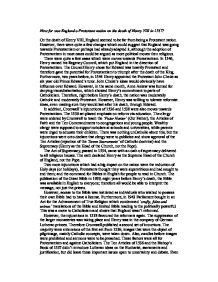 How far was England a Protestant nation on the death of Henry VIII in 1547?

How far was England a Protestant nation on the death of Henry VIII in 1547? On the death of Henry VIII, England seemed to be far from being a Protestant nation. However, there were quite a few changes which could suggest that England was going towards Protestantism or perhaps had already adapted it, although the adoption of Protestantism in most cases could be argued as more political moves then religious. There were quite a few cases which were moves towards Protestantism. In 1546, Henry named his Regency Council, which put England in the direction of Protestantism. The Council Henry chose for Edward was heavily Protestant and therefore gave the potential for Protestantism to triumph after the death of the King. Furthermore, two years before, in 1544 Henry appointed the Protestant John Cheke as six year old Prince Edward's tutor. John Cheke's ideas would obviously have influence over Edward. However, in the same month, Anne Askew was burned for denying transubstantiation, which showed Henry's commitment to parts of Catholicism. ...read more.

Furthermore, in 1943 Parliament bought in an Act for the Advancement of True Religion which condemned 'crafty, false and untrue' translations of the Bible and limited Bible reading to the politically powerful. This was a move to Catholicism and shows that England wasn't reformed. However, the injunctions in 1538 favoured the reformers again. The suppression of the larger monasteries was taking place and Henry was in the company of German Lutheran princes. Therefore Cromwell published a second set of inunctions. The majority were extensions of the first set from 1536; images that were the object of pilgrimage, mainly Catholic concepts, were taken down. Also, candles before images were prohibited and sermons were to be preached. These factors were all for Protestantism and against Catholicism. The Ten Articles of 1536 and the Bishop's Book of 1537 didn't introduce Lutheran ideas on the Eucharist, sacraments and justification, but did leave these important issues open to uncertainty and debate. Even attempts to join England in alliance with Lutheran states - most notably Henry's marriage to Anne of Cleves in January 1540 revealed the extent to which Henry was willing to tolerate reformist ideas. ...read more.

The basic elements of Catholic belief were still in place in 1547. There is little evidence to suggest the Reformation had spread far to the localities other than the removal of monastic charity and the preaching campaign to enforce the supremacy. Cromwell's injunctions had had only a limited impact. Important shrines had been removed and important relics destroyed, but on the whole in the parishes worship and maintenance of images and relics continued as before, often being quickly replaced once visitations had passed. Furthermore, the absence of opposition to the reforms was limited, but not because of popular acceptance but more a fear of punishment or hopes for a reversal of the reforms in the future. The spread of the Reformation amongst the population by 1547 was limited; nevertheless there was in several places a Protestant minority capable of dividing the community. The establishment of royal supremacy over the Church of England had given rise to demands for reform as a result of Henry's forged alliance between himself and reformers, but Henry died a confirmed Catholic, bringing back important Catholic doctrines, leaving money to the poor and endowing priests to say prayers for his soul after his death. ?? ?? ?? ?? ...read more.