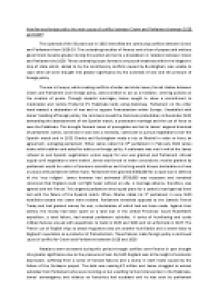 How far was foreign policy the main cause of conflict between Crown and Parliament between 1618 and 1629?

﻿How far was foreign policy the main cause of conflict between Crown and Parliament between 1618 and 1629? The outbreak of the 30 years war in 1618 intensified the continuing conflicts between Crown and Parliament from 1618-29. The underlying troubles of finance and a fear of popery and arbitury government became greater during this period and led to a breakdown in relations between Crown and Parliament by 1629. These underlying issues formed a structural weakness within the kingdom?s ship of state which, added to by the contributory conflicts caused by Buckingham, was unable to cope when all were brought into greater significance by the outbreak of war and the pressure of foreign policy. The war in Europe, while creating conflicts of wider and older issues, forced clashes between Crown and Parliament over foreign policy. James wished to act as a mediator, centring policies on the creation of peace. Through dynastic marriages, James sought to show a commitment to moderation and restore Frederick V?s Palatinate lands using diplomacy. Parliament on the other hand wanted a declaration of war and to support Protestantism within Europe. Unsatisfied with James? handling of foreign policy, the commons issued the Commons protestation in December 1621 demanding the abandonment of the Spanish match, a protestant marriage and the use of force to save the Palatinate. This brought forward issues of prerogative and led to James? angered dismissal of parliament. ...read more.

The debt was nearing £1 million and James struggled to extract subsidies from Parliament who were insisting on but unwilling to fund intervention in the Palatinate. James’ extravagance and reliance on favourites had escalated and he was seen by parliament as ‘leaky cistern’ when it came to the management of funds. When James called Parliament in 1621 he was consequently granted only two subsidies, about £160,000, far short of what was necessary. Parliament used the granting of supply as opportunities to raise domestic grievances such as monopolies. On his succession, James had announced his attention to grant no more monopolies but by 1621 had granted over 100 as a way of aiding his struggling financial position. Monopolies were a major grievance and a total of 16 weeks were spent in discussion. An act on monopolies passed in 1624 aimed to deal with this conflict. Charles’ 1st parliament began with discontent over the loss of subsidies due to the failure of the Mansfield expedition. Granted only two subsidies, about £140,000, Charles broke with precedent and demanded more. He was also angered by the granting of tonnage and poundage for only one year and Parliament’s reluctance to finance a war which they supported. Further conflicts were caused by ship money and the king’s use of forced loans, first called in 1625 and again in the next few years. An amount equivalent to 5 subsidies was extracted but at a heavy political cost. ...read more.

Buckingham held many key positions of power; his rise to Duke of Buckingham in 1623 gave him the highest aristocratic rank outside of the royal family. Buckingham was seen to manipulate the king, appointing his own men to positions of responsibility and taking an active part in policy and decision making. His control of patronage angered many hoping many to gain favour with the king and was thus the source of much factional in-fighting within the court. As Lord Admiral, Buckingham became a very contentious figure as he was blamed for the series of failed expeditions of Cadiz and La Rochelle. In 1626, Parliament attempted to impeach Buckingham on the grounds of high treason. With it likely that parliament would win, Charles dismissed parliament to prevent it. The scenes of public rejoicing at Buckingham?s assassination in August 1628 demonstrated the immense hatred nearly all but the king felt towards him. Instead of using Buckingham?s death as an opportunity to renew relations with parliament, Charles blamed them for his death. Foreign policy heightened the causes of conflict between crown and parliament already existing when war broke out in 1618. The pressures of the conflict brought into question England?s commitment to protecting Protestantism across Europe and, for James, his commitment to peace. Issues of prerogative arose along with the added burden war placed on an already heavily indebted and inefficient financial system. Buckingham became an object of hatred arising from the anger and discontent already existing between crown and parliament from 1618 to the breakdown of relations in 1629. ...read more.